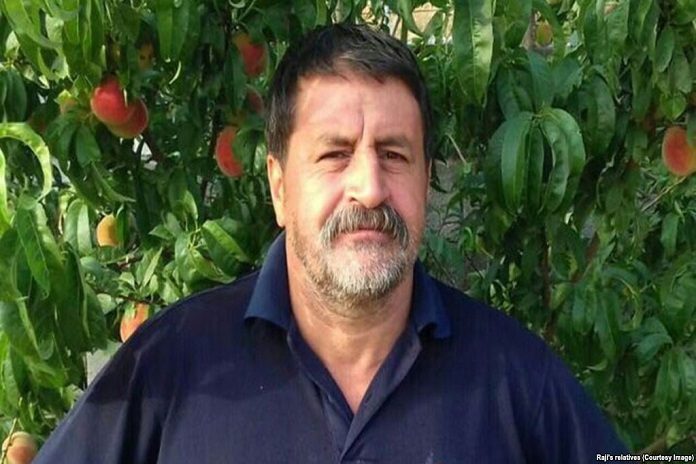 Mohammad Raji, one of the Gonabadi dervishes who was arrested two weeks ago was
killed in police custody due to beating and blows. He was arrested by security guards
during the unrest in Golestan Street in Tehran’s Pasdaran area.
According to the Campaign for the Defense of Political and Civil Prisoners and the
Telegram Channel Majzoban Nour, a close source to Gonabadi Dervishes, confirmed the
news and wrote: “One of the Gonabadi Dervishes arrested in the events of Golestan
street has been killed in police custody due to the beating during interrogation. ”
Shahpour’s Criminal Investigation department agents, in a call to family members, asked
them to go to the Shahpour’s Criminal Investigation department branch 10 along with
Mohamad Raji’s identification to identify him.
Yesterday in an interview with Radio Farda, Tayebeh Raji, daughter of Mohammad Raji
Mohammad, confirmed the news and said, “One of the relatives went to the Criminal
Investigation department. The agents have reported that one of the detainees is in a coma
“due to the beating”. In a telephone conversation with someone who went to the Criminal
Investigation department, they were told that Mohammad Raji was dead.
Tayebeh Raji also said that his father was “severely beaten” during his arrest on February
۲۰th, 2018 and he was in “critical condition”, but could “move his hand” and has had no
contact with his family since then.
She added, “When my father was in a coma, we [family members] had the human right
to be informed so we could visit him”
Taybeh Raji also said that police officers did not give the family any information of when
they can pick up her father’s body.

Mohammad Raji was born in December 1961 in Aligudarz and has 5 children. Currently,
one of his sons, Mohammad Ali Raji, who was arrested at the Golestan Haftom events,
is also being detained in Fashafiyeh’s prison.
On February 19th, 2018, a group of Gonabadi dervishes gathered in front of Pasdar
Street’s police station in protest to the continued detention of the elderly dervish
Mohammad Raji.
When special forces got involved, the gathering resulted in intense violence clashes.
Later, Iranian Officials stated that three police officers were killed in a bus attack, and two
Basiji forces lost their lives during the incident.
According to the latest reports receive by Daravish Follow-Up Committee, nearly 400
Gonabadi dervishes are currently being detained in Fashafiyeh, Gharchak and Evin
prisons.
The family of detained Dervishes reported the poor hygienic condition of Fashafiyeh and
Gharchak prisons; and, while expressing concern about the health of those who was
transferred to these prisons, told the committee that most injured dervishes were
transferred to the prison after treatment in hospitals and did not receive any continued
medical treatment after that. Due to the fracture and wounds of the dervishes and the
unhygienic condition of the prisons, the condition of this prisoner’s dervish is worsening.
There is no information about the fate of many detainees