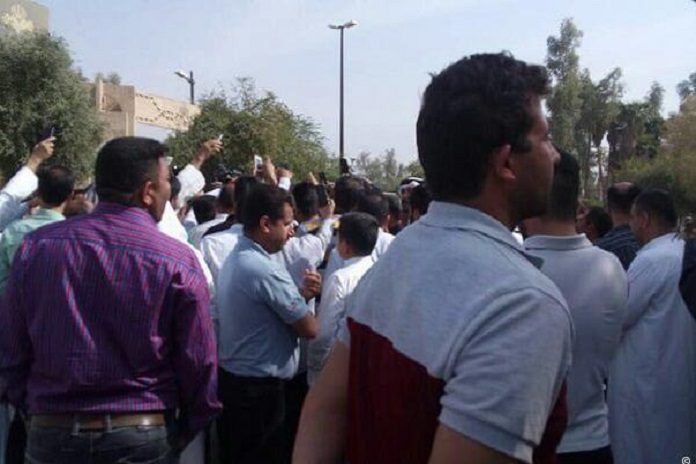 Today, Thursday, March 29th, 2018, second day of protest by Arab residence of Ahvaz against the Islamic Republic’s network programs ‘The Red Hat show (Kolah Ghermezy)’, became violent and a number of protesters were arrested by the security forces.

According to the Campaign for the Defense of Political and Civil Prisoners, today, Thursday, March 29th, 2018, on the second day of the Ahvazian Arab’s protest against the broadcast of ‘The Red Hat show (Kolah Ghermezy)’ in the Islamic Republic’s network a number of protesters were arrested by the security forces. It has been said that “three women are also detained, and the rally became violent with the involvement of security and intelligent forces.”

A well-informed source told Campaign, “In this peaceful protest, Ali Savari member of parliament and Kaabi, the Assembly of Experts representative, came to the crowd and tried to calm the indignant people. Then the police force attacked people using tear gas and direct shooting. “

The source further added: “The police forces attacked the people in a widespread fashion and closed Naderi’s bridge from the market to the Hours Square and arrested 12 people, including 3 women activists.

In recent days, Abbas Kaabi, the representative of Khuzestan in the Assembly of Experts, in a letter to the head of the government’s media, asked for an apology.

According to the letter, Mr. Kaabi criticized the removal of Iranian Arabs as one of the ethnic groups of Iran in ethnic dispersion map, and added that provoking ethnicities is very dangerous and said it is a counter-revolutionary move.

Videos and images posted on social networks show that a large number of Ahvazi Arab citizens continued to demonstrate against Iran’s media in a rally on Thursday at Naderi Street.

Through the slogan, with the traditional stomp of men and the shouts of women, Arabs expressed their protest to what they call “denial of their identity”.