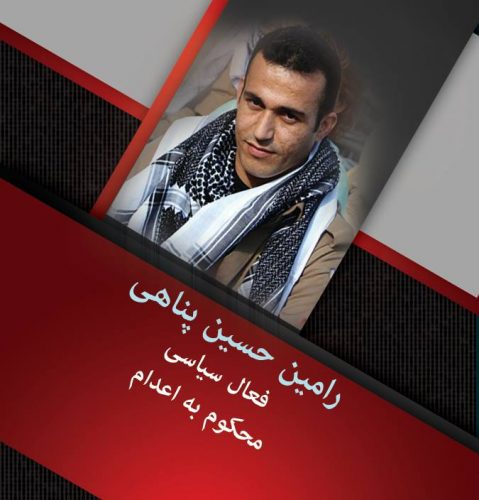 The Supreme Court after confirming the death sentence of Ramin Hossein Panahi, a Kurdish political prisoner detained in Sanandaj Prison, has sent his case to the Branch of Enforcement to enforce the death sentence.

According to the Campaign for the Defense of Political and Civil Prisoners and Amjad Hossein Panahi, Ramin Hossein Panahi’ brother, confirmed the news and said, “The Supreme Court has sent my brother’s case to the Branch of the Enforcement after confirming the death sentence.”

In this regard, brother of the political prisoner, Amjad Hossein Panahi, told the campaign: “Now that his case is sent for order enforcement, going onwards, every night Ramin will sleep with the thought that this might be last night of his life, and let’s by Participating in the Tweetstorm tonight we maybe we help his survival. “A group of human rights activists in support of Ramin Hossein Panahi and attempting to lift his death sentence, on Friday April 13, 2018, from 21:00 to 23:00 Iran time, with  #RaminHosseinPanahi has started a Tweetstorm.

Ramin Hossein Panahi ‘s parents, after receiving the confirmation of their child’s death sentence in the Supreme Court, on Thursday, April 12, 2018 said, ” Before our son execution, we will sit in front of Sanandaj Central Prison and this government must know that, with Ramin’s execution, we will end our lives. We will not wait for Ramin to be executed and we will not remain silent, we will no longer tolerate all this injustice. “

Ramin Hossein Panahi, a Kurdish political activist, was arrested by the security forces of the Islamic Republic on June 22, 2017 and on January 25th, 2018, in just one court hearing was held to prosecute him, by Branch A revolutionary court in Sanandaj, chaired by Judge Saeedi and another judge, was sentenced to death for allegedly acting against national security and membership in the Komala parties.

Brother of the political prisoner sentenced to death said, “In the coming days, our parents are planning to sit in front of the Sanandaj Central Prison to protest this unfair sentence”