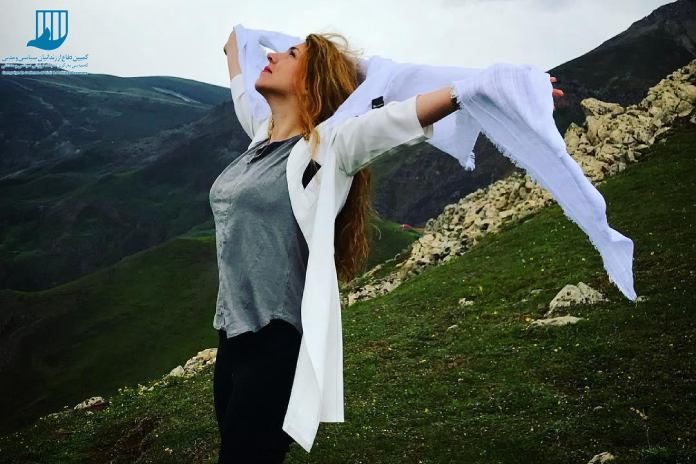 According to the Campaign for the Defense of Political and Civil Prisoners, on May 8th, 2018, Fatemeh (Shaprak) Shajarizadeh, a Girls of Revolution Street (Dokhtaran Khiaban Enghelab), who was arrested for the second time along with her 9-year-old son, was temporary released from the Kashan Prison on 100 million toman bail until the trial. She was arrested because of her protest to the forced hijab.

Shaprak Shajarizadeh’s 9-year-old son was released few hours after his arrest, along with a friend of the Shaprak.

The campaign earlier reported that a “heavy” bail of 150 million toman was issued for this Girls of Revolution Street.

Shaprak Shajarizadeh had been on hunger strike since May 10th, 2018, in protest of her re-arrest in Kashan.

Nasrin Sotoudeh, Shaprak Shajarizadeh’s lawyer, on Thursday, May 10th, 2018, along with Shaprak’s husband went to Kashan public prosecutor’s office to see her client. she said: “I asked my client to break her hunger strike, but because she did not agree to break this hunger strike, I requested that to at least drink some water with salt and sugar. Mrs. Shajarizadeh accepted the request.  I hope that Shaprak be released from prison very soon, given that there has not been any crime in the first place. “

The reason why Shaprak was arrested was to disregard the veil, but Nasrin Sotoudeh said in an interview with Iran Wire earlier: “When she was arrested, she was not without a veil, and based for her charges is the photo that she posted on Instagram. While in law, this charge is raised when a woman disregards her veil in public. So, in fact, my client has not committed a crime. “

Of the dozens of women who have been arrested in recent weeks for protesting the forced Hijab and are known as the Girls Of Revolution Street (Dokhtaran Khiaban Enghelab), at least the name of six women has been identified: Hamraz Sadeghi, Maryam Shariatmadari, Shaprak Shajarizadeh, Narges Hosseini, Azam Jangrudi and Vida Movahed.