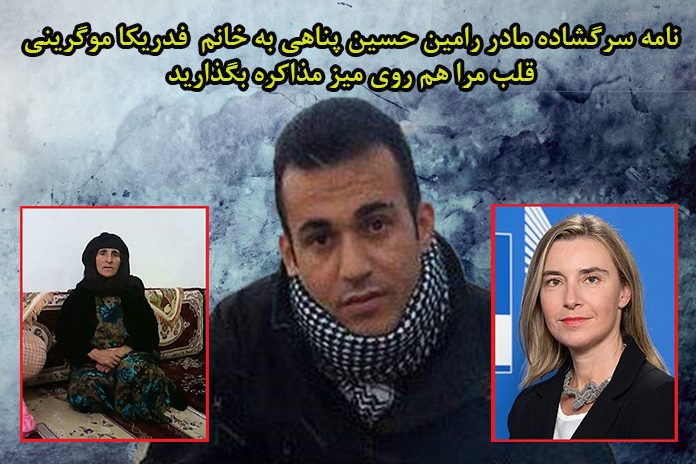 Sharifa Zarini, mother of Ramin Hosseinpanahi, a political prisoner sentenced to death, in a letter to Federika Moghreini, EU’s foreign policy chief, expressed her concern over her son’s imminent execution.

According to the Campaign for the Defense of Political and Civil Prisoners, Sharifa Zarini (Daya Sharifa), Ramin Hosseinpanahi’s Mother, on Thursday, May 24th, 2018, issued heart felt open letter to Federika Moghreini, EU’s foreign policy chief, expressing her concern over her son’s imminent execution.

Part of this letter reads: “While these days, you are talking with Iranian authorities, I implore you to add one more item to the list of requests for negotiation, to cancel Ramin Hosseinpanahi’s death sentence and review his case in a European court.

This is a letter by a mother from a small town in Iran’s Kurdistan, a mother whose heart is in turmoil every day, because her dear son may be executed in a nearby prison after the end of Ramadan. Do you know, what this means? Just thought of this tragedy, I shake to my core, and I detest the word execution.

I heard you are a mother yourself and you have two girls, so you can move away from politics for a moment and hear me with your heart.

I am a pained mother, I’ve known the pain thirty years ago, and I’ve been wandering looking for my children for many years, children who had talked about justice and tried to improve the situation. But here everything is forbidden. We live in hell, and these days, my life is downright an abyss.

Ramin Hosseinpanahi, you have probably heard his name and saw his picture, is my beloved son. Whatever he has done, he should not be killed. Is this an unwarranted word by me? He is a political activist; His case is false and now he is one step away from death.

As you are in the process of talking with Iranian authorities, I request you from the bottom of my heart that you to add one more item to the list of requests for negotiation, to cancel Ramin Hosseinpanahi’s death sentence and review his case in a European court.

With this letter, for a moment connect with the life and spiritually of a mother, who her heart is no longer capable of suffering this catastrophe. These days, my son heart and mine are connected. I know how hard these moments are for my youngest son Ramin with nightmare of execution, and I want you to be close to this moment and put yourself in my place and try to prevent this disaster from happening, and I know it’s possible for you.  I sincerely request you to do this, officially and seriously ask to not execute Ramin.

The campaign had previously reported that, on May 17th, 2018, the case of Ramin Hosseinpanahi, political prisoner sentenced to death, has been sent to Revolutionary Public Prosecutor’s Office in Sanandaj to enforce the sentence.

Hussein Ahmadi Nezam, Ramin Hosseinpanahi’s lawyer wrote on his Facebook page: “Today I met Ramin in the central prison of Sanandaj and told him about his case, he was not upset about the execution of his death sentence, but his regret and sadness was that he was being executed as a terrorist. Ramin has told me today in prison that he has fought ISIL in the Kirkuk Front for three months. I hope that he is not executed, I’m really worried about the sentence. “

Ramin Hosseinpanahi, a political activist, was arrested on June 23th, 2018, and transferred to the Sanandaj Central Prison after 200 days of solitary confinement after going through extreme physical and mental torture. Ramin was sentenced to death on January 15th, 2018, in Sanandaj Revolutionary Court Branch One. The verdict was reaffirmed on April 11th, 2018, at Branch 39 of the Supreme Court in Qom.

About the confirmation on the verdict of the political prisoner, three United Nations experts issued a statement on April 30, 1397 demanding that her death sentence be stopped and her concern was expressed for the mistreatment and torture of prisoners in Iran.

According to Amnesty International, Ramin Hosseinpanahi, who was sentenced to death in January, is in danger of having his sentence executed soon.

According to the report, the Sanandaj Penal Code will be executing the death sentence after the month of Ramadan, which ends on June 14th, 2018.

The group, which says Ramin Hosseinpanahi was convicted in a completely unjust trial, called for the lifting of the verdict.