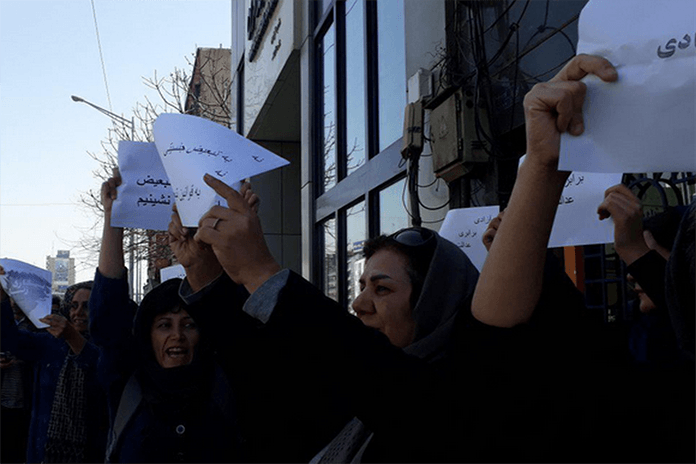 The lawyer of the three detainees from the International Women’s Day gathering, held in front of the Ministry of Labor, announced that all of the individuals had been acquitted by Branch 1180 of the Tehran Penal Code.

Zahra Minoui, on Sunday, July 22nd, 2018, in an interview with ISNA said, “Today, (Sunday), the verdict for three of my clients was communicated to me by Branch 1180 of the Criminal Court Two, and they are acquitted.”

At the end, Minoyi said: “According to the verdict that was communicated to me today, all 21 individuals charged with the case have been acquitted of the accusations.”

In March 2018, a number of women’s activists gathered in protest of gender inequalities in the field of employment in front of the Ministry of Labor, some of them arrested by law enforcement officers and spent several days in Gharchak prison.

On March 8th, 2018, several women gathered in front of the Ministry of Labor building, to observe and recognize International Women’s day on March 8th, and the group was dismantled when the police intervened which resulted in the arrest of a group of gatherers.

The gathering of the March 8th, 2018, for recognition of March 8th (International Women’s Day), in front of the Ministry of Labor building, became violent when the police forces began to interfere. Reports about the violence of agents against the gathering as well as the detention of women were published on social networks and in the Campaign for the Defense of Political and Civilian Prisoners.

In a statement issued by organizers of the gathering, gender-based discrimination and the violation of women’s rights in various areas of the Iranian society, including the inequality of women and men in Iran’s laws, have been challenged.

Elimination of gender discrimination in the field of employment and education, the provision of women’s presence in all businesses without exception or neglect and the elimination of all gender barriers in the employment of women in governmental and nongovernmental organizations, the establishment of adequate unemployment insurance for all unemployed women and housewives, and ability for housewives to receive pensions and disabilities, equal pay for women for the same job category, the right to maternity leave, Decriminalization of the women’s movement in Iran,  the adoption of supportive laws on the prevention of domestic violence, street harassment and sexual harassment at the workplace and creating shelters for women victims of domestic violence were the listed demands in the statement by women activists.

From July 5, 1980, before the Islamic veil became a mandatory public law, they slowly introduced the hijab and banning women from entering government agencies and offices if they did not wear one.  In the beginning of the eighties, the Islamic hijab became wide spread across Iran.