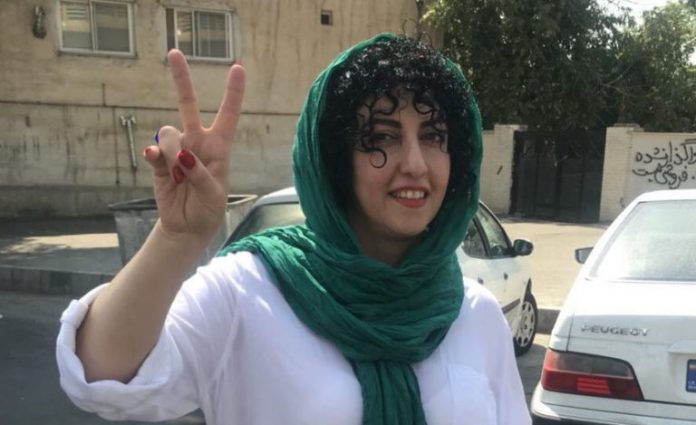 Narges Mohammadi, a civil activist detained in Evin Prison, after four years, was allowed to leave the prison temporarily.

According to the Campaign for the Defense of Political and Civil Prisoners, today, September 26th, 2018, Narges Mohammadi, a human rights activist detained at Evin Prison, was allowed to leave prison for 3 days.

Taghi Rahmani, Ms. Mohammadi’s husband, while confirming the news on his Twitter page, wrote: “Narges Mohammadi went on a three-day prison leave. Due to her illness, she needs a long period of prison leave so that her treatment can be completed. “

On May 2016, Narges Mohammadi, a Sakharov Prize Awardee, was sentenced to 16 years imprisonment by the Revolutionary Court of Tehran. Ten years of sentence was solely because of her activity in the Step-by-Step Campaign for the Abolition of the Death Penalty. The court called her cooperation with the peaceful campaign as a “creating a society aimed at undermining the security of the country”.

Narges Mohammadi stated that during the trial, the judge had an offensive and hostile attitude toward her and clearly and openly defended the charges brought against her by the officials of the Ministry of Intelligence. The human rights activist has repeatedly argued that the judge has accused her of trying to change divine rules through her activities against the death penalty.

Other 6 years of Narges Mohammadi sentence was for “gathering and colluding against national security” and “using propaganda against the regime”, which was also the basis of her peaceful human rights activities.

Among Ms. Mohammadi activities, which led to her conviction was an interview with the media about human rights abuses, participation in peaceful gatherings in front of the prison in support of the families of prisoners sentenced to death, connection with other human rights activists including Nobel Peace Prize winner Shirin Ebadi, participation in the peaceful protests against acid attack and meeting with Catherine Ashton in 2013. Based on all these alleged crimes, Branch 36 of the Tehran Court of Appeals upheld Narges Mohammadi’s verdict of 16-year prison sentence in October 2016.

In May 2017, the request to reinstate her trial was rejected by the Supreme Court.