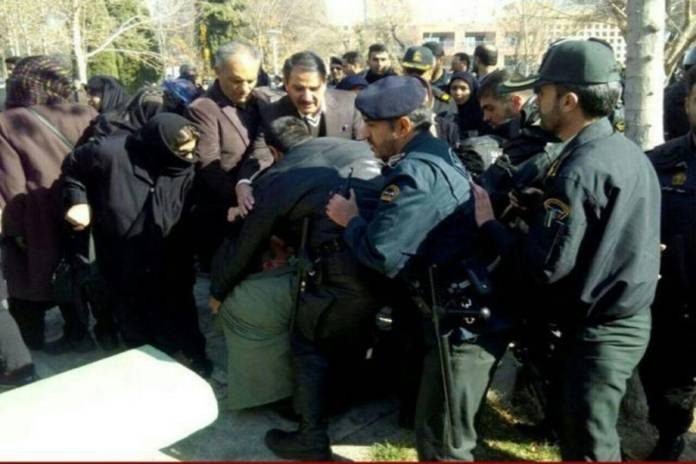 This morning, a number of retired and current teachers gathered in Isfahan, in front of the School District Office. According to the eyewitnesses, the gathering became violence.

According to the Campaign for the Defense of Political and Civil Prisoners, on Thursday, December 27th,2018, a number of Isfahan teachers, based on a call previously published on social networks, gathered in front of the Isfahan School District office in a protest against the teachers’ arrest and the issuance of sentences for them. Protesters other demands are, “the abolition of the full-time teacher scheme, the security of economic and health care for retirees, the increase in education budget and the increase of teacher wages.”

According to local sources, security guards were on the area from 10 am to 1 pm, which eventually led to violence. Many people were arrested and security guards tried to disperse the protesters with tear gas.

He added: “They were seized the cell phones of anyone who was intended to film the event. Many people cell phones were seized, and of course, many were arrested as well. The security guards arrested a number of women and put them in the van and drove them to an unknown location. “

The source added, “This week the crowd was more than the previous week. Because they came from neighboring cities. The number of protesting teachers was very large, and it seemed to me that the security forces had an order for immediate attack. Suddenly we were attacked by tear gas and pepper spray. “

At the end, he said: “At this point, he does not know the names of the detainees, but teachers will explain the whole event to students in their classrooms in the coming days, and will tell them about their demands.”

It is necessary to explain that the protesters showed their protest by reading “Yare Dabestani Man” (My School Mate Friend) song and chanting ” Until we get our rights, we will not give up “, “All this injustice, never seen a nation”.