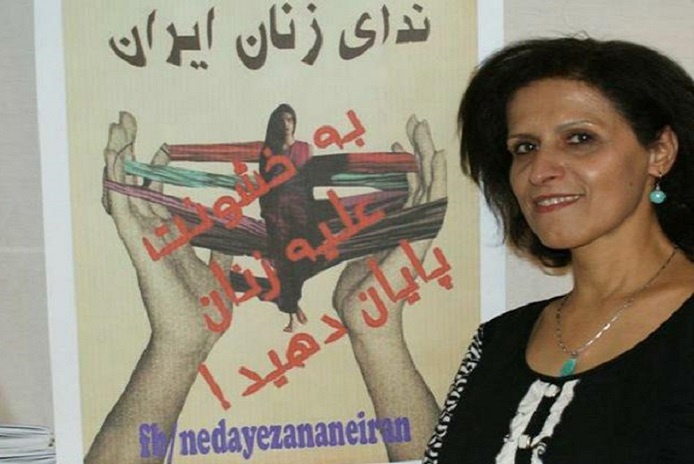 The case of Akram Nasirian, a member of the ” Voice of Women of Iran “, was sent to the Gharmsar Public Prosecutor’s Office. The activist of the women’s field, was temporarily released from Evin Prison on 200 million Tomans bail on Sunday May 26th, 2019.

According to the Campaign for the Defense of Political and Civil Prisoners, the case of Akram Nasirian, a women’s rights activist and member of the “Voice of Women of Iran”, has been submitted to the First Branch of the Court of Justice of Gharmsar Public Prosecutor’s Office.

Mrs. Nasirian has been informed by electronic mail that her case has been filed in the First Branch of the Court of Justice of Gharmsar Semnan province.

The Women’s activist wrote a note on her personal page announcing the news: “Since I have never worked or lived in Gharmsar during my life, and I have always been in Tehran, the choosing Gharmsar for my case in is questionable.”

Security officials arrested Ms. Nasirian, a member of the “Voice of Women of Iran ” and a group of helper to flood victims, on Monday, April 29th, 2019. They transferred them to section 209 of the Ministry of Intelligence in Evin Prison.

Ms. Nasirian was an active figure in women’s literacy and in the group helping the flood-affected people.

Nahid Shaghaghi, another member of the Voice of Women of Iran, arrested in her personal home on Wednesday morning of May 15th, 2019.  She is still detained and under interrogation in section 209 of Evin Prison.