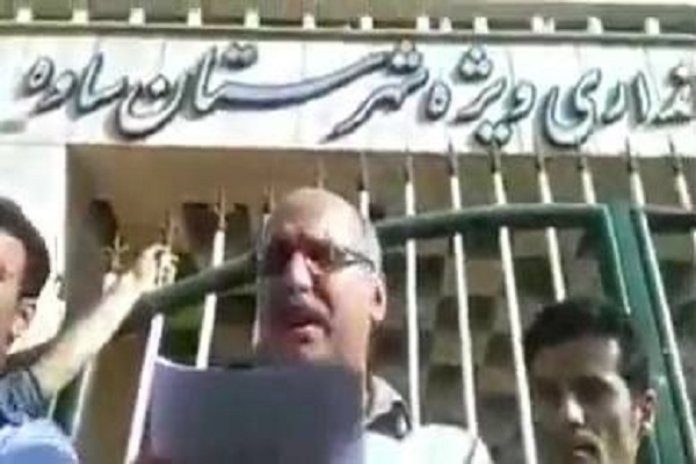 On Monday, July 29th, 2019, around 9pm, security forces raided Shapour Ehsanirad’s workplace and arrested him and transferred him to an unknown location.

The Free Trade Union of Iran telegram wrote about this board member; “He is a former representative of Saveh Navard Profilin workers and a founding member of the Social Workers’ Retirement Council (BSTA).”

After retirement, due to the not enough retirement wages, Shapour Ehsanirad had been working as a part-time member of HOA for a residential complex since April 26th, 2019. The security agents arrested him there and took him with themselves.

Shapour Ehsanirad was one of the coordinators of the protest petition of forty thousand workers, the legal adviser to the Strike and Rolling Safa Workers, representative of the discharged Saveh Factory Workers, and representative of 1000 workers for a complaint against the Social Security Fund.

He had been arrested many times before and had been sentenced to prison and whipping.

In recent months, some members of the Free Trade Union of Iran have been arrested or summoned, and pressure on labor activists has increased.

Jafar Azimzadeh, secretary of the board of directors of the Free Trade Union of Workers of Iran, is currently in prison. The lawsuits filed for Parvin Mohammadi, Nahid Khodjoo, Nasrin Javadi, Farhad Sheikhi, Hadi Soleimani and Mehdi Fakhri.

The Free Trade Union of Iran has condemned the arrest of Shapour Ehsanirad and called on labor organizations and international institutions to demand the release of all detained workers.