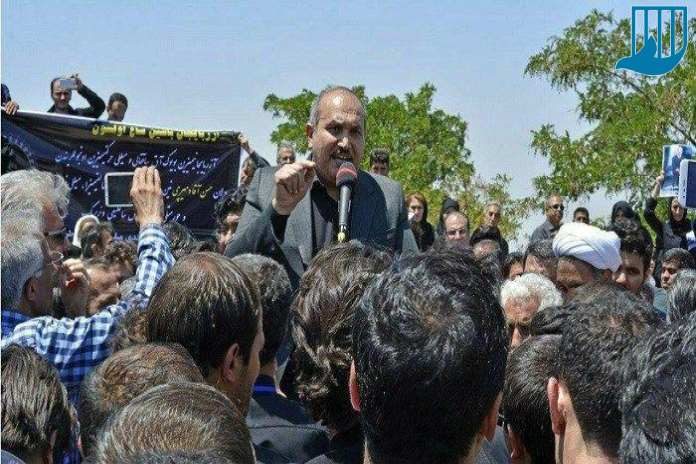 Abbas Lesani, a Azerbaijani activist and political prisoner held in Ward 7 of Ardebil Prison, was transferred to an out-of-prison medical center for treatment. He was later returned to prison after medical examinations and receiving prescriptions. The medical doctor diagnosed his physical deterioration as a result of repeated hunger strikes in prison.

According to the Campaign for the Defense of Political and Civil Prisoners, on Wednesday evening, August 7th, 2019, Abbas Lesani was transferred to Fatemi Hospital Ardebil for severe abdominal pain after being evaluated at the prison clinic.

Mr. Lesani returned to Ward 7 of Ardebil Central Prison after he was tested and prescribed medication.

An informed source told the Campaign: “Mr. Lesani confirmed the news to his family that this was a viral disease. After questioning Mr. Lesani about his incarceration and medical records while in custody, his doctor identified the disease as a consequence of the repeated hunger strikes.”

The first branch of the Ardebil Revolutionary Court, chaired by Judge Khodadadi, sentenced Mr. Lesani to 8 years in prison and 2 years of exile to Yazd. Even though Abbas Lesani was acquitted of the charges in his case, the campaign sources said that, he was “convicted, in a controversial move, on the basis of new charges.”

The fourth and final hearing of the charges against Abbas Lesani was held at Branch One of the Ardabil Revolutionary Court on Thursday June 27th, 2019. Mr. Lesani’s lawyer and prosecutor’s representatives were also present at the court.

This prisoner in Ardebil Central Prison went on a hunger strike to protest the prison authorities’ refusal to give him access to the summary of his case file on Monday, May 27th, 2019. On June 15th, 2019, after his second court hearing, he ended his hunger strike conditionally.

Faced with accusations of “forming a Gamag group”, “acting against national security”, and “propaganda against the system”, he said in his second court hearing: “The judicial authority is mistaken in defining the movement and the organization. The National Movement of Azerbaijan is a movement based on the people of Azerbaijan to gain the rights of the nation. The history of the events and activities of the national movement shows that it has been and will be fully consistent with the civil and peaceful movement”.

Mr. Lesani had previously been sentenced to ten months imprisonment in a preliminary court trial and was charged with “propaganda against the regime and in favor of opposition groups” through a speech at the funeral of Hassan Damirchi, the Azerbaijani musician.

Subsequently, the Branch 26 of the Court of Appeal of East Azerbaijan Province, chaired by Judge Mikayel Khobiarpour, sentenced Mr. Lesani to 10 months imprisonment on the charge of “propaganda against the system in favor of opposition groups”.