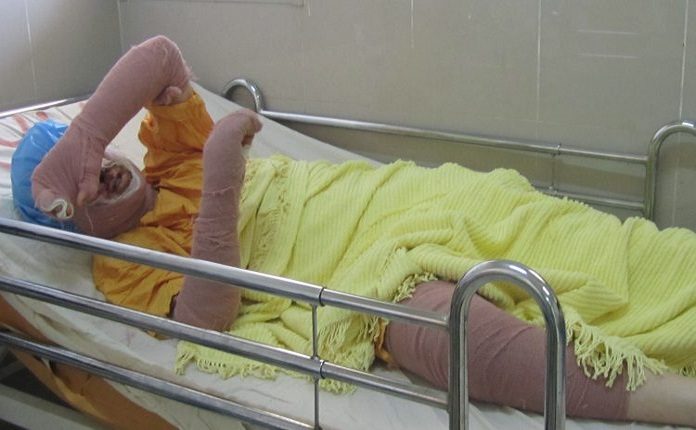 “She died three days ago. But they did not hand over her body to family. They said [I] should go and understand some rules first.”

This is Sahar’s family friend, Reza’s (alias), description to IranWire. A girl whose family tried to introduce her by the nickname “Sara” but soon became known as the “blue girl” in the Iranian media and cyberspace.

According to IranWire, In March 2018, Sahar wanted to enter the Azadi Stadium to watch the Esteghlal and AlAin soccer game in the AFC Champions League, where the police arrested her. She spent three days in detention until her family provided a 50 million Tomans bail. When she was released, she was given a court date. At the court, the judge did not show up; however, Sahar was told in the hallway of Tehran’s prosecutor’s office that she would serve between six months and two years in prison.

When she left the prosecutor office, she poured gasoline on herself and set herself on fire. The sister said she was suffering from bipolar disorder and had repeatedly reported this to the court with her medical records, to no avail.

On Saturday, reporters who went to Motahari Hospital to meet Sahar Khodayari and her family heard a common phrase from security officials: “It’s a security issue. You don’t have the right to go up.”  They took some of the reporters’ correspondence card and wrote down their names. One of them said that some security guards were filming and photographing those who were planning to meet with Sahar or her family.

But one of Sahar’s family friends, Reza, said that Sahar had died the day before (Friday) and had her respiratory tract removed. At first, her family was taken to be understood: “Her family was told not to interview. Preferred not to have a funeral, but a small family gathering. They said foreign and domestic agents were waiting for this news to take advantage and [their] daughter had already caused enough money for the country on damage control.”

Sahar was buried in Qom’s “Behesht Fatima” on Sunday, quietly and with no one’s awareness. The blue girl’s body was delivered to her family to the last moment.

“The main concern now is for her family. They are very scared,” Reza told IranWire.

The day after Sahar’s quiet funeral was over, Motahari Hospital was allowed to release news of her death.