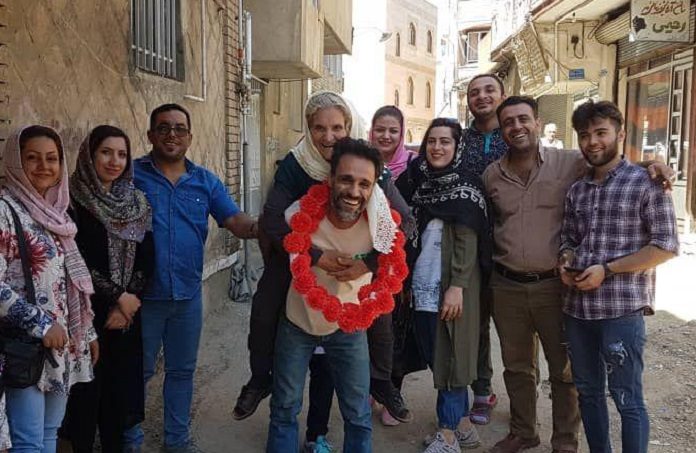 Aram Zandi, a labor activist from Sanandaj who was arrested on Wednesday, August 28th, 2019 by intelligence forces with “severe physical violence”, was released temporarily from the Central Prison in Sanandaj on a bail of 100 million Tomans.

According to the Campaign for the Defense of Political and Civil Prisoners, Aram Zandi was temporary released from the Sanandaj Central Prison on 100 million Tomans bail, on Thursday September 12th, 2019.

According to informed Campaign sources, on Sunday, Mr. Zandi was informed about his case in the Second Branch of the Revolutionary Public Prosecutor’s Office. After the branch’s interrogator, Judge Musa Shah Goldi Al-Bagher, issued a bail of 100 million Tomans, Zandi was transferred to Sanandaj Central prison.

Mehrdad Aminvaziri, a Sanandaj-based labor activist in connection with Mr. Zandi’s release, told the Campaign, “For this labor activist who was first questioned by the Second Branch of the Sanandaj Revolutionary Public Prosecutor’s Office headed by Judge Musa Shah Goldi Al-Bagher on a charge of “propaganda against the system”, a 500 million Tomans bail was issued. The bail was later reduced to 300 million Tomans. On Wednesday September 11th, 2019, with his family’s presence at the interrogation branch, the bail reduced again to 100 million Tomans. After providing the bail amount, Mr. Zandi was released from Sanandaj Central Prison on morning of September 12th, 2019.

It was reported that due to public holidays and not being able to provide the bail money, this labor activist was transferred to Sanandaj Central prison.

At the time of Mr. Zandi’s arrest, his mother, Maryam Mirki, was taken to the hospital in Sanandaj due to what she described as the security force’s violence and a history of illness. She was treated in the intensive care unit of the hospital.

Mr. Aminvaziri also told the Campaign, “Due to the” physical violence” during Mr. Zandi’s house search and arrest by security forces and the severe clashes that took place, Mr Zandi’s mother’s condition became critical. She had to be taken to the intensive care unit of the Hospital in Sanandaj.”

Aram Zandi and Fouad Zandi, two brothers and labor activists in Sanandaj, have been arrested several times by security forces and sentenced to prison by the judiciary system.

Aram and Fouad Zandi were arrested earlier on the eve of May 1st, the International Labor Day, in the wake of the attack by plainclothes officials, on April 14th, 2015. They were then released from the central prison in Sanandaj on a 100 million bail for each charge on May 30th, 2015.

These two workers’ activists in Sanandaj were also held in the Intelligence Detention Center of Sanandaj and underwent “interrogation and torture” for one week on March 16th, 2011.

Aram and Fouad Zandi were sentenced to one year in prison at Branch One of the Sanandaj Revolutionary Court, presided by Judge Mubarak, on charges of “setting up Komala Day on the slopes of Mount Abidar” along with nine other labor activists in Sanandaj. They were eventually released from Sanandaj Central Prison on bail of 30 million Tomans.