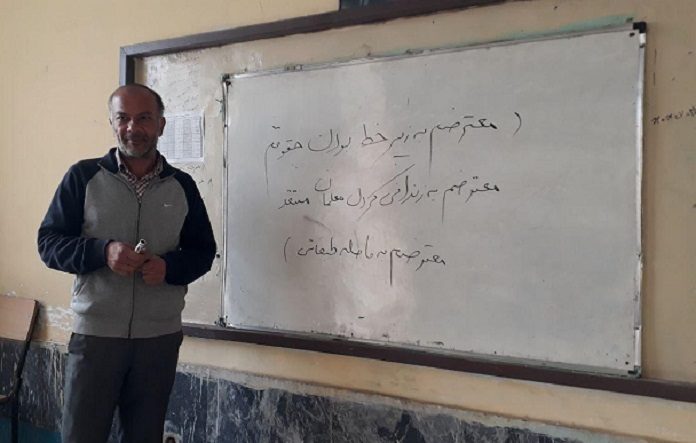 Houshang Koshkie, a teacher’s rights activist in the Lorestan province, who was temporarily released on bail from Khorramabad Prison on Saturday August 24th, 2019, was arrested again.

According to the Campaign for the Defense of Political and Civil Prisoners, security forces arrested Houshang Koshkie again and transferred him to an unknown location in Lorestan province on Saturday, September 14th, 2019.

The reason for Mr. Koshkie’s arrest is not known yet.

Mr. Koshkie was previously arrested by security forces on Monday, July 15th, 2019, at the Taleghani School for disables, and after 40 days of detention, he was released on bail on Saturday, September 24th, 2019.

During his previous arrest, he was detained in Khorramabad Revolutionary Guard Intelligence Detention Center, without having a right to contact anyone.

It is reported that, one day after Mr. Koshkie’s arrest, on Tuesday July 16th, 2019, security officials went to the Taleghani school and seized the film that was recorded by facility security camera at the time of the arrest of the teacher.

In a video on his personal page, Mr. Koshkie recently announced his support for a statement called the 14th, which was signed on June 11th, 2019 by 14 activists.

Prior to his arrest, Mr. Koshkie had released a video on his personal page announced his support for a statement called the 14th, which was signed on June 11th, 2019 by 14 activists.

The signatures of this statement called for Ali Khamenei’s resignation and constitutional change.