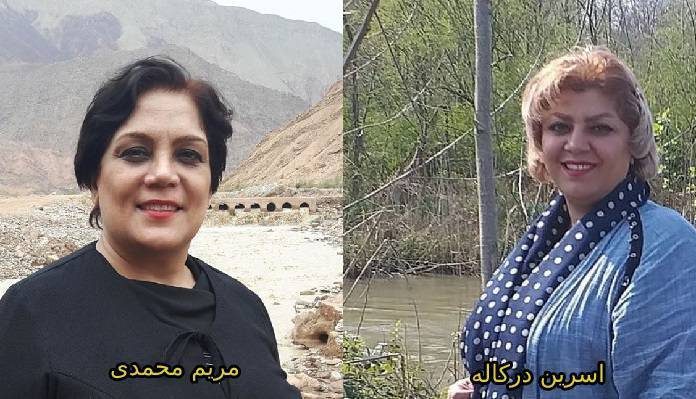 Maryam Mohammadi and Asrin Darkaleh, two members of the Voice of Iranian Women Association, were each released on a bail of 300 million Tomans. The two women’s rights activists were detained by Ministry of Intelligence agents in Garmsar and taken to Evin Prison for interrogation.

According to the Campaign for the Defense of Political and Civil Prisoners, Maryam Mohammadi and Asrin Darkaleh were temporary released from Evin Prison on a 300 million Tomans bail each on Tuesday, September 17th, 2019.

It should be noted that, in addition to these allegations, Ms. Mohammadi was also charged with “forming the Voice of Iranian Women Association to undermine the security of the country.”

On Sunday, July 28th, 2019, Asrin Darkaleh was arrested by intelligence officials in Garmsar. This member of Voice of Iranian Women Association was first transferred to the Garmsar Public Prosecutor’s Office and then transferred to Ward 209 of Evin Prison.

An informed source told Campaign about the arrest of Mrs. Darkaleh: “Mrs. Darkaleh was recently fired and arrested by security forces on the street when she went to her workplace with her son to file for unemployment benefits.”

Maryam Mohammadi, Ms. Darkaleh’s cousin, was also arrested on Monday, July 8th, 2019, by security forces in Garmsar. She was then transferred to Ward 209 of the Ministry of Information located in Evin Prison.

It has been reported that the two activists attended a ceremony marking International Women’s Day in Tehran that were organized by Voice of Iranian Women Association on March 6th, 2019.  These two activists had speeches on issues related to the topics of “Women, the Main Forces in the Protest” and “The Movement’s 40 Year Anniversary”, and that these speeches caused their arrest.

The detained members of Voice of Iranian Women are said to be active in promoting women’s literacy, helping to raise awareness and pursuing women’s rights demands, protecting women from domestic violence, opposing forced and early marriage for children, as well as assisting flooded people.