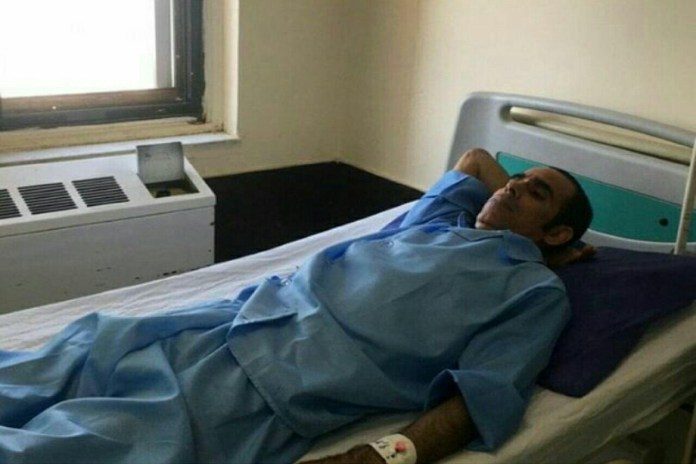 Najaf (Kaveh) Mehdipour, a journalist and owner of the suspended “Bakhtar zamin” magazine, was transferred to a hospital in Ilam for severe respiratory problems.

According to the Campaign for the Defense of Political and Civil Prisoners, on Tuesday September 17th, 2019, Najaf (Kaveh) Mehdipour, the owner and director of the suspended bi-weekly magazine “Bakhtar Zamin” , was transferred from the Darrehshahr to Ilam’s Central Prison on Thursday, August 29th, 2019. Afterwards, he was transferred to Mustafa Khomeini Hospital in Ilam for treatment for severe respiratory problems, where he was admitted to the intensive care unit by the orders of a specialist physician.

While confirming the news, an informed source told the Campaign, “Mr. Mehdipour, a detained journalist who was recently transferred from Darrehshahr Prison to Ilam’s Central Prison, became so sick in prison yesterday that he was unable to walk and suffered from severe respiratory problems. With the order of specialist physician, he was admitted to the Mostafa Khomeini Ilam Hospital intensive care unit”

The source added: “The journalist was in a good physical and emotional condition when he was transferred to prison to serve his sentence. The judicial authorities and prison officials must now answer to the prisoner’s current health condition.”

Mr. Mehdipour, who was serving a one-year sentence in Darrehshahr Prison, was transferred to the Ilam Central Prison on Thursday, August 29th, 2019, after a verbal argument with the Ilam Prison Chief.

Regarding the reason for the transfer, an informed source told the Campaign, “On Wednesday, August 28th, 2019, the head of the Ilam Prisons, arrived at Darrehshahr Prison and left the prison when Mr. Mehdipour protested during his speech. On the next day, Mr. Mehdipour was transferred to an unknown location under the orders of the chief of Ilam Prisons. After following up, his family discovered he had been transferred to Ilam Prison; however, his family was denied the right to visit.”

At that time, a group of Ilam’s cultural-civil activists demanded that his rights be respected. Due to his physical and emotional condition, as well as having a sick mother and young child, human rights organizations were calling for the attention of inmates such as his lesser-named.”

Najaf Mehdipour is a journalist and the owner of the bi-weekly suspended publication “Bakhtar Zamin”, which was shut down after the publication of criticisms towards leaders of the Islamic Republic of Iran in regard to human rights abuses.

The first branch of the Ilam Revolutionary Court sentenced the journalist to a total of one year in prison on charges of “insulting the leadership” and “propaganda against the system”, on September 4th, 2018.

In the annual report by the 2019 World Press Freedom, Iran is ranked 170 out of 180 countries, and the number of journalists detained in Iran has increased in recent months.

Iran was also ranked 164 out of 180 countries in the 2018 World Press Freedom Reporters, Reporters Without Borders list.