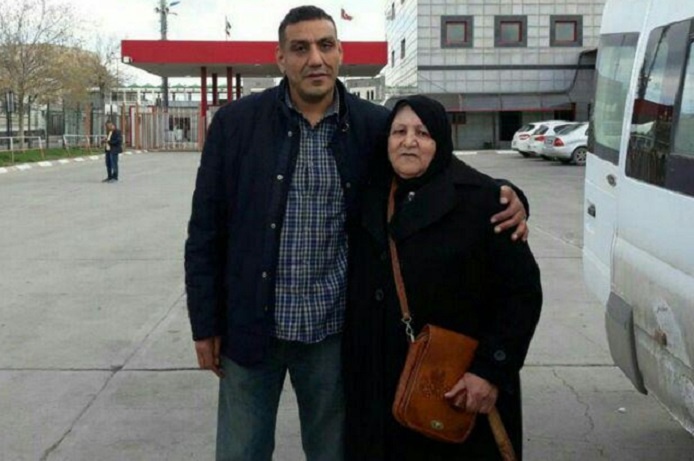 Akbar Lakestani, an Iranian-American dual citizen, was arrested by Orumiyeh Revolutionary Guard Intelligence officials at the “Sarv” border after entering the Iranian territory and was transferred to the detention center for questioning. The reason for his travel to Iran was due to his elderly mother’s illness. The political activist had earlier been arrested by security forces in May 2007 and sentenced to prison terms by the Khoy Revolutionary Court.

According to the Campaign for the Defense of Political and Civil Prisoners, Akbar Lakestani, an Iranian-American dual citizen, was arrested by IRGC after entering the Iranian territory on the “Sarv” border on September 28th, 2019.

According to this report, Mr. Lakestani, a veteran of the Iran-Iraq war needs several insulin injections daily due to his diabetes, which has also raised concerns from his family.

A source close to Mr. Lakestani’s family told Campaign Reporter, “Akbar was trying to enter Iran from the Sarv Orumiyeh border because of his elderly mother’s illness, and was arrested by the IRGC on Saturday, September 28th, 2019.”

The source familiar with Mr. Lakestani’s arrest said: “On Tuesday, October 1st, 2019, Mr. Lakestani was transferred from the Intelligence Detention Center to the interrogation branch of the Orumiyeh Revolutionary Prosecutor’s Office, where he was informed of the charges of ” insulting the leaders”, “disturbing public opinion”, and “illegally crossing the border”. A temporary arrest warrant was issued and he was arrested and was then transferred to the Orumiyeh Intelligence Office’s detention center for questioning.”

Mr. Lakestani, the head of the Shute City Council and a veteran of the Iran-Iraq war, was arrested in 2007 on charges of “insulting government officials” and “propaganda activity against the system”. He was temporarily released on 40 million Tomans bail after a month.

The reasons for the charges were due to a speech at the mosque in the city of Shute, for not welcoming the President (Ahmadinejad) in September 2006, sending a list of death and wounded for the events in Azerbaijani cities with a letter from the Shute City Council its signature to the United Nations, interviews with foreign media, and public protests over his disqualification from the third term of the Islamic Council in the courtyard of the parliament.

The Khoy Revolutionary Court sentenced Mr. Lakestani to three years in prison in December 2007.  Due to his multiple health issues and serious physical deterioration, as well as reports from a trusted prison physician and medical reports from Maku Prison, he was temporarily release on bail. After a while he was forced to leave the country due to the pressure from security forces.