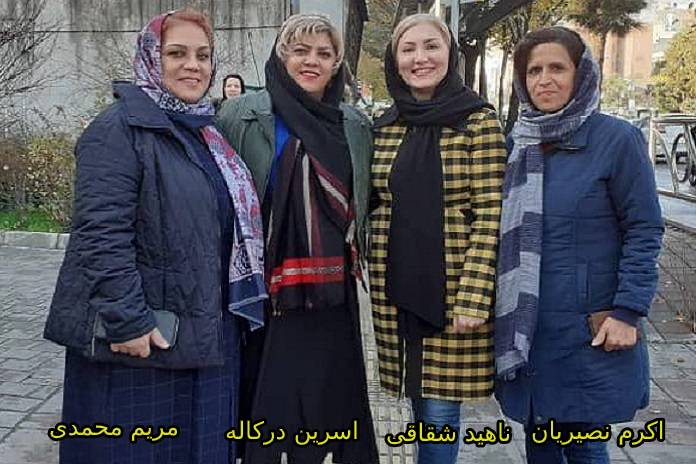 Maryam Mohammadi, Asrin Darkaleh, Nahid Shaghaghi, and Akram Nasirian, all members of the organization “Voices of Iranian Women”, were each sentenced to 50 months in prison by a Revolutionary Court Branch 26, chaired by Judge Iman Afshari. The court hearing on the charges against these four women’s rights activists was held on Wednesday, December 4th, 2019.

According to the Campaign for the Defense of Political and Civil Prisoners, Maryam Mohammadi, Asrin Darkaleh, Nahid Shaghaghi, and Akram Nasirian were sentenced to prison terms by the Revolutionary Court Branch 26 on December 10th, 2019.

Upon final confirmation of these sentences and based on Article 134 of the Islamic Penal Code (Criminal Code), the 3 years sentences shall apply to any member of the Voice of Iranian Women organization.

Based on a summons issued by the Judiciary (SNA) Electronic System on Thursday, November 21st, 2019, Maryam Mohammadi, Asrin Darkaleh, Nahid Shaghaghi, and Akram Nasirian were asked to appear before Revolutionary Court Branch 26 on Wednesday, December 4th, 2019.

It should be noted that, in addition to these allegations, Ms. Mohammadi was also charged with “forming the Voice of Iranian Women group to undermine the security of the country.”

All detained members of Voice of Iranian Women were released from Evin Prison on bail until the end of the case investigation.

Ms. Nasirian was arrested in the street by security forces and taken to Ward 209 of the Ministry of Intelligence in Evin Prison for questioning on Monday April 29th, 2019. She was allegedly charged with “disturbing public opinion and encouraging dishonesty” and the charges were communicated to her at the time.

This women’s rights activist was released temporarily on a bail of 200 million Tomans on Sunday, May 26th, 2019.

On Saturday, June 22nd, 2019, Ms. Shaghaghi, who was arrested at her house and taken to Evin Ward 2019 on Wednesday, May 15th, 2019, was released temporarily on a 200 million Tomans bail until the end of case investigation.

On Wednesday, September 4th, 2019, women’s rights activist Maryam Mohammadi was communicated by Judge Nasiripour, the head of the Second Investigation Branch, on her charges after she tried to obtain her latest defense during her transfer to the Evin prosecutor’s office.

Maryam Mohammadi was arrested by security forces in Garmsar and taken to Ward  ۲۰۹ of the Ministry of Intelligence, located in Evin Prison on Monday, July 8th, 2019.

On Tuesday night, August 6th, 2019, Asrin Darkaleh and Maryam Mohammadi were transferred from Ward 209 of Evin Prison to the Women’s General Ward. On Tuesday, September 17th, 2019, they were each temporarily released until the end of their case investigation on a bail of 300 million Tomans.

It has been reported that the two activists attended a ceremony celebrating International Women’s Day in Tehran that was organized by Voice of Iranian Women Association on March 6th, 2019.  These two activists had speeches on issues related to the topics of “Women, the Main Forces in the Protest” and “The Movement’s 40 Year Anniversary”, which caused their arrest.