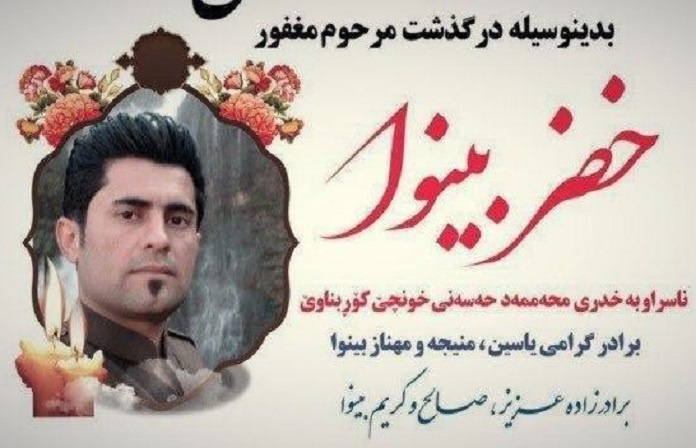 Khezr Binawa, a porter from “Darman Ava” village in Sardasht, who was wounded from firings by the Revolutionary Guards Corps, has died after ten days in a hospital in Mahabad due to serious injuries.

According to the Campaign for the Defense of Political and Civil Prisoners, on Sunday, January 5th, 2019, Khezr Binawa, who had been a direct shooting target of border guards stationed at Kani Siwe border crossing point in Sardarasht, West Azerbaijan province, died after 10 days in hospital due to the severity of his injuries.

According to this report and local sources, on Friday evening, border guards stationed at the “Kani Siwe” border area of ​​Sardasht in western Azerbaijan, targeted a group of porters without prior notice, allegedly carrying a trafficked goods, and with the direct firing, Mr. Rashidzadeh, 28, from village of “Ghale Rashi”, lost his live and Mr. Binawa, 25, were severely wounded in his head and was taken to a hospital in Sardasht. Later, because of the severity of injury, he was taken to Mahabad hospital, but after 10 days in the hospital, he died from his injuries.

Porters are people who, due to lack of employment and extensive economic problems in the border regions, are forced to transport goods from Iran to Iraq and vice versa using informal customs entry with a very low wage.

Since the beginning of March 21st, 2019, tens of porters have been killed or wounded in border areas because of direct firing by border guards, cold, drowning in the river, falling from altitude and avalanche.