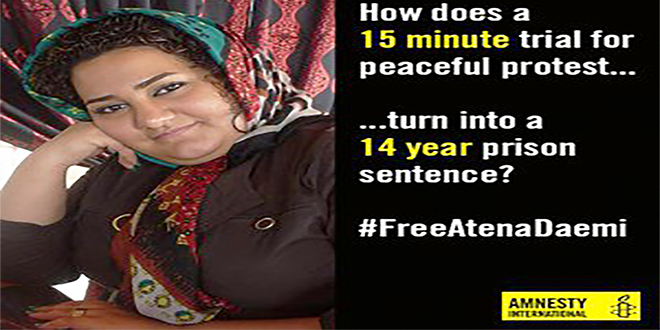 Atena Daemi, a 27-year-old civil rights activist, has been convicted to 14 years in prison for her peaceful activism. “Her trial apparently lasted no more than 15 minutes and took place at the same time as the trial of three others” as Amnesty International said.

Atena’s allegation was “gathering and colluding against national security”, “spreading propaganda against the system”, “insulting the founder of the Islamic Republic of Iran and the Supreme Leader” and concealing evidence”.

The charges derived from the criticism on her Facebook and Twitter against executions and human rights violations in Iran, as well as her participation in gatherings outside prison in solidarity with families of death row prisoners, distribution of anti-death penalty pamphlets and her association with Human Rights defenders and the families of those killed during the crackdown that followed the 2009 election. She was also accused of supporting Kobani through attending the demonstration that gathered in front of UN office in capital of Iran, Tehran.

Atena Daemi was detained in Oct 2014, and spent 58 days in the solitary confinement. She was then taken to a cell shared with another person, but had no access to a lawyer.

Therefore, Amnesty International has postured an action to support the civil rights activist Atena Daemi acting and sending a message in its website as well.

Amnesty International has made a stand and expressed concern over her critical situation and wrote in its official website;

Ensure that Atena Daemi receives any medical attention she may require;

Respect Articles 19, 21 and 22 of the International Covenant on Civil and Political Rights — to which Iran is a state party — which protect the right to freedom of expression, association, and assembly.