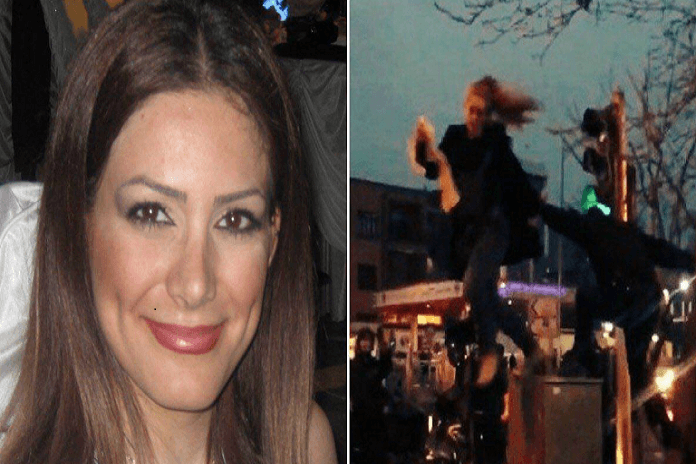 Maryam Shariatmadari, the girl who removed her scarf on February 21st, 2018 and was kicked down from the power station platform by security forces, has been charged with promoting disrespect to the hijab and acting against national security.

Iran’s Human Rights Campaign, while confirming the report, quoted from a source: “Maryam Shariatmadari has been charged with promoting disrespect to the hijab and acting against national security.

“We do not know the reason for the charge of “acting against national security” or based on what evidence.” said the source close to Maryam Shariatmadari.

Also, yesterday, Nasrin Sotoudeh, who has been pursuing the cases for some of the detained girls who protested the forced hijab, wrote on her Facebook page: “Today, I went to Qharchak prison in Varamin and requested a meeting with both of my clients Fatemeh Shajarian, with alias Shaprak and Maryam Shariatmadari.  My request was denied. Prison authorities told me they were not allowed to give visiting time to lawyers! Meanwhile, Shaprak has been on a hunger strike for three days in protest of her lack of access to a lawyer and her poor conditions. Maryam Shariatmadari’s foot has been severely damaged, and her access to the lawyer has become impossible.

Both of these families were faced with irreparable wanderings, and were tired of traveling between the Evin Prosecutor’s Office, the Ershad, the Qharchak prison, and Evin with no result. Yesterday and today, they learned about their girls in women’s prison.

Maryam Shariatmadari, 32, is a computer major student at the University of Amir Kabir.

On February 21st, in a protest against the forced hijab, she stood on top of telecommunication boxes in and waved her white scarf.

Of the dozens of women who have been arrested in recent weeks for protesting the forced Hijab and are known as the Girls Of Revolution Street ( Dokhtaran Khiaban Enghelab),  at least the name of six women has been identified: Hamraz Sadeghi, Maryam Shariatmadari, Shaprak Shajirzadeh, Narges Hosseini, Azam Jangrudi and Vida Movahed.

On Saturday February 24th, one of the Girls Of Revolution Street ( Dokhtaran Khiaban Enghelab), Narges Hosseini, , was on trial for three charges, most notably “encouraging corruption.” She also faced two other charges: “non-compliance with the religious hijab” and “pretending to act haram’

On February 27th, Tehran Police Chief, said the girls who removed their headscarves in different parts of Tehran will be faced with “serious police action”. “Sardar Hossein Rahimi said that it is obligatory for civilians to observe the Islamic principles in the Islamic society and the Islamic Republic of Iran.

Regarding the law enforcement officer who threw down the girl from the top of the Power Box for taking off her hijab, Sardar Hossein Rahimi told reporters. “We have reminded our agents that they must comply with legal requirements. Our agents must also act in accordance with the rules and regulations. “

However, Tehran Police Chief did not explain why an officer, whose job is to protect the security of the people, deliberately threw a citizen to the ground and caused damage to her foot.

While Tehran Police Chief has talked about the need for compliance with law enforcement regulations by agents, Shahrzad Hemmati, a journalist, on February 27, 2018 wrote on her in Twitter: “Last night, after the announcement of a silent hour in the Qharchak prison, Shaparak Shajarizadeh, Maryam Shariatmadari, and 10 of the female dervishes were called for questioning. This is while the interrogation at this time is against the rules. “

Also, a tweet journalist Jila Baniyaghoub has written about Shaparak Shajarizadeh and Maryam Shariatmadari’s poor condition. According to the journalist’s notes, none of them are in good physical or mental condition, and they are held in terrible conditions in Qharchak prison.

Ms. Beni-Yaqhoub on a tweet reported on Shaparak Shajarizadeh’s hunger strike. She started her hunger strike on February 24th, 2018 in protest of her poor living conditions and lack of access to a lawyer.

In the wake of the growing Iranian women street protests against the forced Hijab following Girls Of Revolution Street ( Dokhtaran Khiaban Enghelab), on February 12th Tehran Police announced that they arrested 29 people with the charge of removing headscarf and handed over to the judiciary.