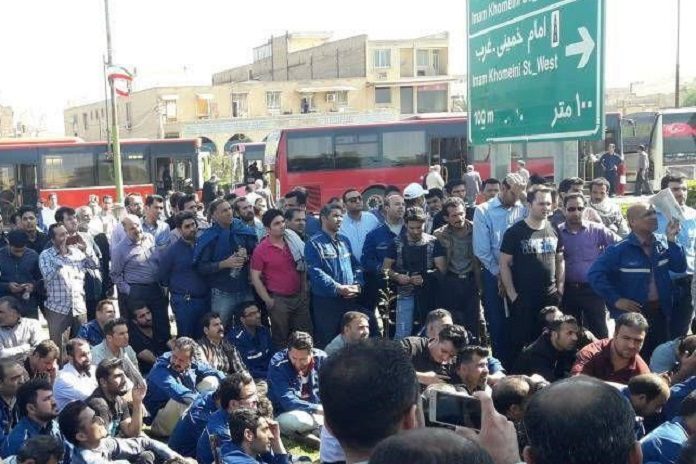 Last night, security forces arrested at least 10 workers from the Ahvaz National Steel Industrial Group and transferred to an unknown location.
According to the Campaign for the Defense of Political and Civil Prisoners, last night March 1st, 2018, on the ninth day of the Ahvaz National Steel Industrial Group worker’s strike and after frequent gatherings in front of Ahvaz Governor office and also after a march in Ahvaz city, security forces went to the protest workers’ houses and arrested them. It has been said that these mass arrests were executed by the order of Attorney General’s Office in Ahvaz, in addition to more than 10 worker arrests, Ahvaz police contacted many workers and asked for their home address.
It has been reported that following this mass arrest, a group of this industry workers after learning about their colleague’s arrest, in the afternoon gathered in front of the city’s Central Judicature office and demanded the release of their colleagues. Following this gathering, law enforcement officials told workers that tomorrow their arrested colleagues will be sent to the Revolutionary Court Branch 12 to decide on their cases. According to reports from the Free Trade Union of Iranian Workers, on Friday morning Law Enforcement confirmed the arrest of the workers of the Ahwaz Steel National Industrial Group.
The names of nine of these workers are as follows: