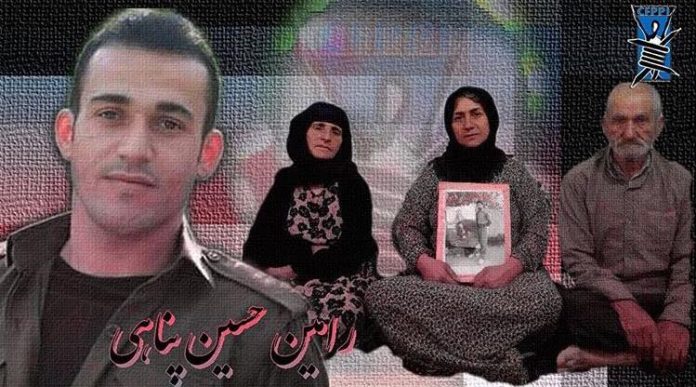 February 28th, 2018, with Judge Saeedi order, Sanandaj Revolutionary Court Branch One removed Ramin Hosseinpanahi prison visitation ban and the Kurdish political prisoner was able to meet with his family and his lawyer.

According to the Campaign for the Defense of Political and Civil Prisoners, on Wednesday morning, February 28th, 2018, with Judge Saeedi order, Ramin Hosseinpanahi prison visitation ban was removed and the family and lawyer of this political prisoner detained in Sanandaj prison were able to meet with him.

Campaign for Free Ramin Hosseinpanahi, confirmed the news and said: ” By imposing prison visitation ban for Ramin and staging for his brutal execution, The Islamic Republic of Iran is evaluating the extend of people’s objection and protest to these inhumane sentences. Campaign for Free Ramin Hosseinpanahi was one of the big and successful campaigns in organizing and protesting the death sentence of a political activist. Still, we must continue to push and protest to cancel Ramin’s death sentence. For the moment, we have moved one step further and prison visitation ban is canceled. We once again announce that Ramin has not committed any crimes and his death sentence should be immediately canceled.” On February 5th, 2018, Ramin and Afshin Hosseinpanahi, ended their hunger strike after 10 days. The hunger strike was in protest to Ramin Hosseinpanahi death sentence.  Ramin Hosseinpanahi, a political activist, on June 23th 2017, while traveling to Sanandaj to visit his ill mother, was shot and injured and then arrested by Revolutionary Guard. They claimed he had armed conflict with them, but the attorney, the family, and even the prisoner himself strongly rejected this claim. Ramin Hosseinpanahi was sentenced to death on charges of “acting against national security and Komala membership “.

The first court session for this Kurdish political prisoner was held on January 15th, 2018 at Sanandaj Revolutionary Court Branch One, chaired by Judge Saeedi and another judge.On January 19th, 2018, after serving more than 200 days detention in Ministry of Intelligence’s solitary confinement cell, the Kurdish political prisoner was transferred to the Sanandaj Prison. Earlier, Amnesty International, based in London, issued a statement announcing the arrest of Ramin Hosseinpanahi and four of his family members as “compulsory disappearance” and called for the disclosure of their fate and their whereabouts, as well as transparency regarding Ramin Hosseinpanahi’s situation who was arrested while wounded in Sanandaj incident.