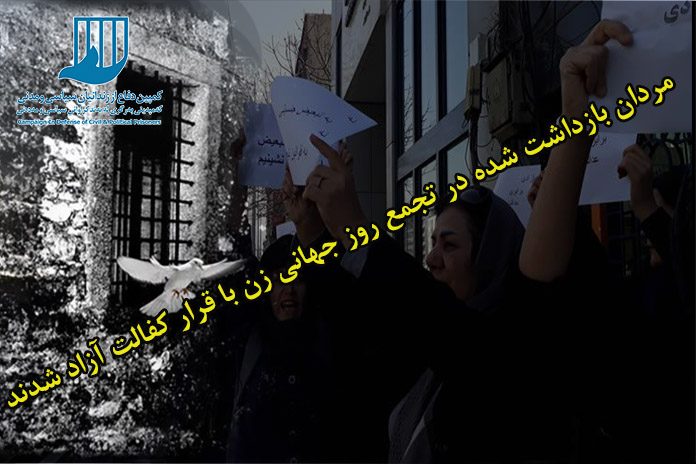 According to the Campaign for the Defense of Political and Civil Prisoners, five male civil rights activists named Ali Afsoungar, Ali Salem, Peyman Chehrazi, Mehrdad Ghazi, and Javad Abbas Tavaluli, who were arrested on Thursday, March 8, 2018, in Front of Ministry of Labor Building by law enforcement and security forces and were taken to the Feshafoyeh prison were temporary released on March 17, with bail until their trail.

On March 8, 2018, the International Women’s Day, several civil rights activists organized a rally in front of the Ministry of Labor building in Tehran. The gathering was dragged out by police intervention. According to reports published in some media outlets, 84 people (59 women and 25 men) were arrested at the gathering.

The organizers of the March 8 gathering spoke about gender-based discrimination and the violation of women’s rights in various areas of the Iranian society, including the inequality of women and men in Iranian law.

During the past years, women in Iran have always been somewhat under the Islamic Republic microscope, and the increased pressure on women has begun since the first years of the revolution with the obligatory hijab and still continues. Recently, the form of women’s oppression has changed, and any kind of activity that is not associated with the goals of the Islamic Republic is opposed.