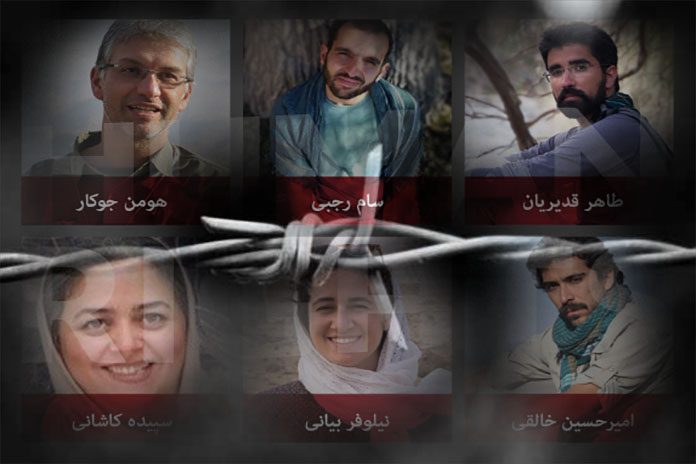 The seven arrested environmental activists’ detention has been extended until March 25th, 2018. Except for Niloofar, none of the detainees ever met with their families since their detention, and their lawyers were not allowed to meet with the clients and review their cases.

The human rights campaign, quoting from an informed source, confirmed the news and wrote “none of the detainees had met with their families since the time of their detention, and only Niloofar ‘s mother and father were called for to visit their daughter for a moment.  Niloofar came waved, and left. “

According to this source, they still do not have any information on the charges against the detainees: “No one responds to the families. The detainees are allowed time to time to have a very short call to their family. Families do not have any place to go. “

The source also said: “The parliamentarians who in the first days of arrest have called to finalize detainee’s situation, have been silenced in recent days and ” seem to have stumbled out” “.

The source referring to recent family visits with parliamentarians said, ” Two weeks ago, families went to representative Moammad Aref’s office. After he listened to detainees’ parents, he said “We will purse.” Abdulkarim Hosseinzadeh told them that there would be releases soon. Mohammad Kazemi told the families that their children are spies and you do not know. “

“Everyone says something and nobody does anything,” said the source. “We are powerless, and our loved ones are in jail in unspecified circumstances.”

The source about the wildlife heritage vehicles transfer said, “The Revolutionary guards had taken the cars that detainees were using to look for greyhound in the region. Some of the vehicles belong to the Wildlife Heritage Office, and some were private cars that were either parked at the Picking Office or in the area. We really do not know why these cars have been confiscated. “

A few days after Kavoos Seidamami death media coverage, Hossain Rouhani formed a four-member committee to track down his death and the status of arrested environmental activists, which still has no news. Even the result of Seidamami’s autopsy has not been communicated to his family until now.

The arrests of environmentalists continued in silence in the media until Ramin Seidamami, the deceased Kavoos Seidamami’s son, on February 19th, 2018, on his Twitter and Instagram’s account announced his father’s death in jail. Subsequently, the detention of other media activists became public news.

Kavos Seidamami died in prison two weeks after being arrested. The prison authorities have claimed that he has committed suicide in prison.