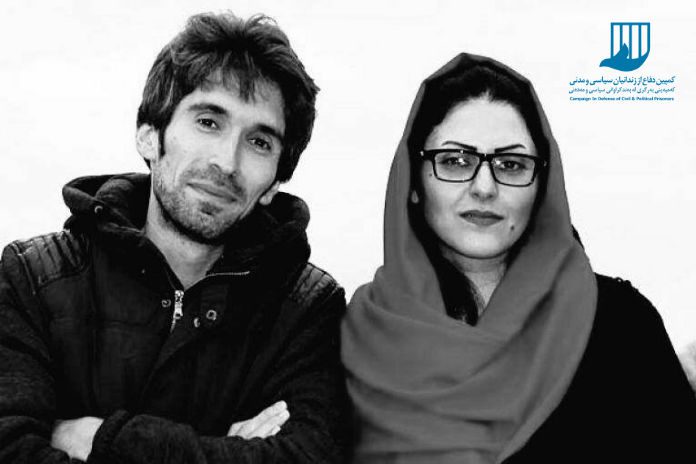 Arash Sadeghi, a political prisoner detained in Rajai Shahr prison in Karaj in an open letter calls for support for his wife Golrokh Ebrahimi.
Golrokh Ebrahimi, is a civil activist who has been on hunger strike for 73 days.
According to the Campaign for the Defense of Political and Civil Prisoners, on January 24th, 2018, Golrokh Ebrahimi Iraee along with Atena Daemi, after beaten and insulted by security forces, was transferred to the Gharchak Prison in Varamin. On February 3rd, 2018, in protest to her situation, she announced her hunger strike in a letter published from Gharchak Prison. After 73 days, she continues her hunger strike and according to informed sources close to the political prisoner, she has lost more than 20 kilos and has had seizures multiple times and she is at risk of losing her kidneys. But despite the serious deterioration of the civil activist health, the security-judicial authorities have not yet responded to her demands.
On Tuesday, April 10th, 2018, Human Rights Watch issued a statement calling for the immediate release of Golrokh Ebrahimi Iraee, a political prisoner detained in the Gharchak prison in Varamin.
Arash Sadeghi, Golrokh Iraee’s husband, wrote in part of this letter, the scenario of false accusation and transferring her, is a set up by the headquarters of Sepah-Sarallah. The story is the same story of false accusation, which is being created this time in prison.
Following is his letter:
Her name is Golrokh. Born in the beautiful city of Amol. Due to his father’s career, spent her childhood in Dezful. The city of Dezful, and decade of war, bombing and displacement during the eighties, may not be her only bitter memories of her childhood. Still in her early childhood her father was hit in head by an explosion in one of the war operations and remained in a coma for year and half. After he came out of the coma, for many years, he continued to be immobile. Due to Golrokh ‘s her father situation, her mother was forced to leave her teaching job that she loved and for many years nursed her husband.
Golrokh childhood disappeared in the war, her youth and adolescence came. She started to write small stories. The magical pen, in a society that has always been immersed in war, violence, death, and torture, wrote of love, a humane world, a world free of violence and war, full of passion and life.
The utopia of her mind is a society free of discrimination and injustice. She strived to eliminate the same discrimination and injustice she saw.
Teaching and educating Children- of- Work (Child labor) and human rights activities in opposition to executions and war may have been a small part of her activities towards achieving that ideal society. Detained for a fiction storyline her first character was stoned. They arrested her with bracelets and blindfolds, but she did not submit in Prison, even though they broke her pen and locked her mouth, she still screamed with a closed mouth.
Today, Wednesday, April 11th, 2018, Golrokh Iraee, ended her 67th day of hunger strike, when, despite her health deterioration, authorities carelessly left her at a hospital under the watch of the Revolutionary Guard.
Golrokh, in protest to false accusation and her illegal transfer with beatings and insults, started hunger strike on January 24th, 2018, and continued the hunger strike with not being able to walk.
The weight loss of more than 20 kilograms, caused impairment to her speech and vision, and severe kidney problems, were the side effects of the long-term hunger strike.
The scenario of false accusation and transferring her, is a set up by the headquarters of Sepah -Sarallah. The story is the same story of false accusation, which is being created this time in prison.
Two female prisoners were being insulted and beaten and with a ridiculous false accusation and without any judicial orders were being deported to Gharchak Prison for physical and emotional pressure. To protect human rights and human dignity, in the absence of an independent judiciary, there is no choice but to protest and resist.
In an outrage against this case, Golrokh Ebrahimi Iraee, in an attempt to protest, even putting her life on the line, expressed the highest possible objection to this oppression and appeals to a fair board of the great nation of Iran and all the people of justice in the world.
I descend on the bow before her courage and perseverance; I will finish my letter with a sentence from her, and I ask all the consciences people to become the voice of the of Golrokh and Atena.
Free spirit ones, are a historic almighty, and the thing that never can be detained is the spirit freedom.
Arash Sadeghi – Gohardasht Prison / Tuesday, April 11, 2018 “