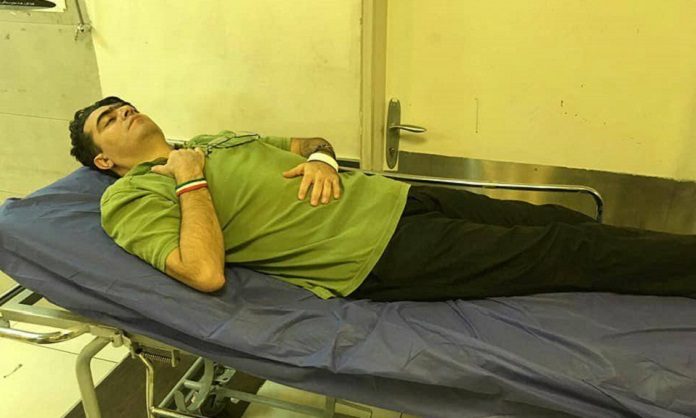 After ten days of Ismail Abdi’s hunger strike and the onset of physical problems, judicial authorities have not only failed to meet his demands, but also refuse to send him to the hospital or medical facilities.

Esmail Abdi, a detained teacher and board member of Teachers’ Union, started a hunger strike on Tuesday, April 24th, 2018, in protest of the massive violations of Iranian citizens, teachers, and workers’ rights.

A source close to this political prisoner on said in a conversation with the Human Rights Campaign in Iran on May 3rd, 2018, “After ten days of the hunger strike, fluctuations in blood pressure, respiratory illness, palpitations, and kidney disorder caused by Mr. Abdi’s previous hunger strike escalated. He requested to be sent to the hospital for treatment outside the prison, but the judicial authorities did not respond to his letter. “

The source told the campaign: “Abdi has asthma and palpitations, and after three long hunger strikes he also has kidney problems and suffers from headaches and dizziness. His cell mates say he should go to a hospital out of the prison to treat the pain and prevent his kidney failure. So he wrote a letter asking to be sent to hospital, but no one answered the letter, either positive or negative. “

The political prisoner also went on hunger strike with similar demands on July 2015 and May 2016. In both cases, after a prolonged hunger strike and health detestation, he was released temporarily, but shortly after was arrested again. The prisoner’s teacher was temporarily released after a prolonged hunger strike and deterioration, but was shortly arrested and imprisoned. This activist has been arrested and tried several times with similar charges since 2009, was arrested on November 9th, 2016, without charge and transferred to Evin Prison for six years imprisonment.

Esmail Abdi was arrested on Thursday June 25th, 2015, after the Iranian education group protest against education system disarray. Abdi was illegally arrested when he intended to go to Canada to attend the World Teachers Summit as a representative of the Iran Council for the Coordination of Teachers’ Trade Unions throughout the country. In January of the same year (2015) in a primitive court under the chairmanship of Judge Salavati, he was sentenced to six years in imprisonment, and the verdict was confirmed by Branch 36 of the Tehran Court of Appeals.

On April 20th, 2018, before the hunger strike, 44-year-old math teacher, in an open letter addressed to the Iranian people and international organizations such as the World Association of Teachers, the World Labor Organization and Amnesty International, criticized the lack of independence of the judiciary, the failure of the judiciary to comply with international conventions as well as its own constitution, corruption, and the widespread poverty of teachers and workers and the suppression of peaceful political and civil activities.