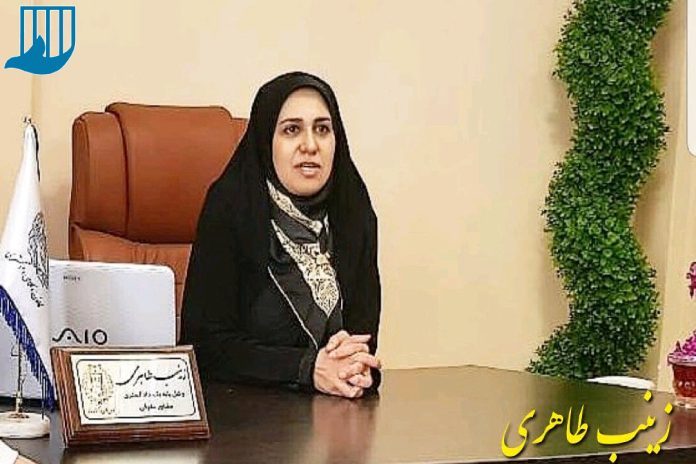 Zainab Taheri, a lawyer, was summoned by Branch Two of the Public Prosecutor’s Office of Culture and Media on charges of disturbing public opinion and publishing lies.

According to the Campaign for the Defense of Political and Civil Prisoners, Zeinab Taheri, a judicature lawyer, on May 24th, 2018, published an image of her summons in her telegram channel, announcing that she “she has been summoned by Branch Two of the Public Prosecutor’s Office of Culture and Media on charges of disturbing public opinion and publishing lies. “

The lawyer, who represents individuals like Mohammad Sales, Ahmadreza Jalali and Mohammadali Taheri, in her personal telegram wrote that the reason for the summon is her serious pursuit of the rights of the Iranian people regarding legitimate freedoms, and said “to take revenge on me, they are charging me for disturbing public opinion and the publication of lies and summon me to the same Court that ordered the filtering. “

She continued: “The steady pursuit of the rights of the great nation of Iran for the legitimate freedoms, including access to cyberspace and the Telegram, the strong defense of Darwish Mohammad Salas, transfer the voice of my innocence client to the world, and publishing critically and authoritative documents explicitly with responsibly and fairly, regardless of the fake scope that some have made for themselves. It seems that they are not happy with this. Their personal interpretation of the laws has no end. “

Zainab Taheri, on Tuesday, May 22th, 2018, said about her client, Mohammad Saleh Darvishi, who was sentenced to death on charges of murder: “We filed a request for the restoration of the hearing of Mohammad Salas to the Supreme Court, and we requested a suspension and we hope with the reason and the documents that we have, they will examine it.”

She said in an interview with ILNA, May 23th, 2018, “Mohammad Salas case has been sent for execution, but in accordance with the law, we have appealed to the Supreme Court.”

“We demand a request for a moratorium and a re-examination of the case based on documents, and evidences.” the lawyer said.

A three retaliations sentence was issued against Mohammad Salas while he denied the charge of murder. The judiciary has argued that Mohammad Salas murdered police force with a bus. This is while his lawyer, as well as Mohammad Saleh himself, rejected the claim.

Zeinab Taheri said: “The had beaten my client severely and forced him to confess against himself.”

The Gonabadi Dervish rally took place in the Pasdaran area of Tehran in February 2018, in protest Nematullah Riahi’s arrest, a Gonabadi Dervish and resident of Shahrekord, who was arrested by security officials in Tehran on February 18th, 2018.