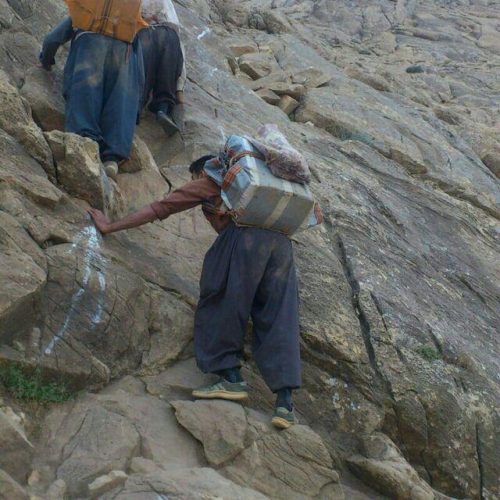 During the past three days and in the last week of May 2018, five Kurdish porters were killed or wounded directly by the border guards. On May 31st, 2018, a porter from Savar village, was killed in the Baneh province, by border guards direct shooting in the Sardab’s border area. Similarly, on Monday May 28th, 2018, a security officer shot and killed a Kurdish porter from Dorow village in Oshnoeih area.

According to the Campaign for the Defense of Political and Civil Prisoners, On May 31st, 2018, Kamal Mohammadi, a Kurdish porter from Savar village in Baneh area, was killed by Sarab border security forces direct shooting.

It was reported that due to severe injury from shooting, this porter died immediately and his body was transferred to the Solaimaniyah Hospital in Kurdistan, Iraq.

Also, on Tuesday, May 29th, 2018, another Kurdish porter named Salim Khalili from Dasht Bill in Oshnoeih area, was severely injured as a result of the direct shootings by government troops.

On Monday May 29th, 2018, two other porters named Khalil Farrokhi, 32-year-old, from Drou village in Oshnoeih area, and Sirvan Moradi, from the Koni-Rash village in Oshnoeih area, were severely injured resulting from a direct firing of the Iranian government’s military forces at Speririz mountains. Another porter named Rybawar Moradi, 28-year-old, from Kanirish village, also died by the Killed.

During the year 2017, many of the people that had no choice other than to work as porters, have been killed or injured during their working hours. Kurdish human rights media reported that “at least 227 porters were killed and wounded during the past year (2017).”

Every winter due to the sharp decrease in extreme temperatures and unbearable cold temperature in the border regions, the number of victims increased. Just during the winter of 1396, sixteen porters were killed and 25 were seriously injured.

Out of a total of 227 porters’ casualties, at least 73 people were killed and 154 were wounded. Majority of these porters have been seriously injured by the border guards’ shots, and some have suffered from natural hazards, such as being trapped in the cold and snow, or from falling from the heights.