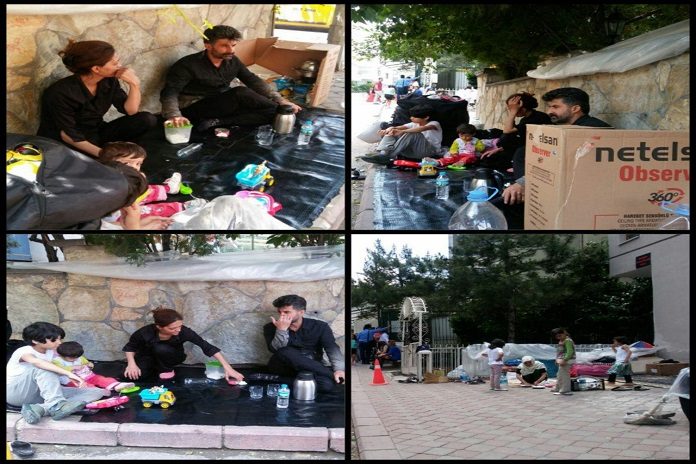 The United Nations High Commissioner for Refugees (UNHCR) in Turkey is the most active branch of the organization in the Middle East. The majority of political refugees facing problems in Iran have come to Turkey in various ways and have registered with the Office of UNHRC.

According to some political refugees in recent years, after a failed coup in Turkey, unprecedented economic problems and significance rise in prices, have made life harder than before, and, on the other hand, the prolongation of the process of political refugee cases, especially after the adoption and non-transfer of cases for transition to a safe country has led to much impediment to the lives of many refugees.

Shahram (Rahim) Elyasi is a Kurdish political refugee who spent nearly four and half years undergoing registration with the Turkish Refugee Commissioner.

On Monday June 4th, 2018, the political refugee along with his wife and two children took sanctuary in front of the commissioner’s office in the city of Ankara in protest to the prolongation of asylum process and the lack of United Nations Commissioner accountability to refugees.

Shahram Elyasi, 41, a Kurdish citizen from Marivan, was a porter k in the border areas before he was arrested by security forces in Iran.

The Kurdish political refugee, regarding the problems and reasons for his departure from Iran, told the Campaign: “On October 8th, 2008, I was arrested in Malard Shahriar by security forces and after 60 days in solitary confinement in Rajaishahr Revolutionary Guards Prison, on charges of cooperating with the” Kurdish Opposition, Komala  Party support, and action against national security “was sentenced to 11 years in prison by Shahriar Revolutionary Court first branch, chaired by Judge Mirghfari.”

He continued: “After 6 years imprisonment in Rajaishahr, Evin and Marivan prisons, I was temporary released for 15 days on 100 million-toman bail from Rajaishahr prison, after which I decided to leave the country. Because I was married and at that time, had a young child, I could not afford to pay my family from prison, and my best years of life was wasted away in prison. I left the country and presented myself to the UNHCR in the city of Van in Turkey. Of course, I would add that the 100 Million Toman bail, which included two house titles of 50 million Toman each, was seized by the state. “

“So far, about 100 times through letters, e-mail and phone I have communicated my problems to the United Nations but still, I did not receive any answer, I filled emergency forms and have not received any answer,” said the political refugee protesting in front of the UNHCR’s camp in Ankara. It’s been around for 3 years since my case was accepted, but so far, I have not been assigned a country. I came here with my family because I knew that they would not pay attention to me so soon, so I am sitting down here until they give me a reply.

“During these days, I have been advised by a number of Yuan employees. One human rights organization in Ankara talked to me, filled out an emergency form for me and promised me that they will answer the next week and if they do not respond, they will send my case to the human rights institutions in Europe.

“I will sit here and except for special or emergency cases, I will not leave until my case is decided and I am convinced. If I do not receive answer, my wife and I will start a hunger strike.

The political refugee said in a statement on the problems of refugees in Turkey: “Here are many problems and I am tired of being second-class citizen. One of the problems is the lack of work permit and livelihood problems. The first day in the Immigration organization we have to sign a form that we do not have permission to work, so we have to work illegally to provide for the living necessities. A Turkish worker receives a salary of between 60 to 80 Liras per day. We do the same job for 30-40 Liras. We are also stressed at the end because we don’t know whether the employer will pay our salaries or not. I’m tired of being afraid, the fear of rent, the fear of living expenses.

Here, if I am interested, I cannot do human rights activism and be the voice of our friends in Iran. Because most organizations are volunteering and in addition, I do not have the right tools, like laptops and phones. “

At the end, he said: “I, plea to all who work in some way with human rights organizations and institutions to just put themselves in my shoes for a moment and see the pain that I am going through. I have not just come here for myself. I am the voice of all refugees, I am the shared pain of all refugees! “

Asylum seekers in Turkey, and political refugees, face many problems, including the problems of uncertainty about their future, to the point where even those whose’ cases are accepted by the UNHCR, say they are still facing uncertainly and living in very difficult situations for years.

Some human rights refugee experts and activists believe that the wars in the recent years in the Middle East and the rising population of Syrian and Iraqi refugees can be one of the reasons for slow process of file transfer to third countries, and on the other hand, some of countries that accept refugees   such as The United States, Canada and Australia have made this path more difficult than before for Iranian refugees, by changing their policies to refuse refugees.