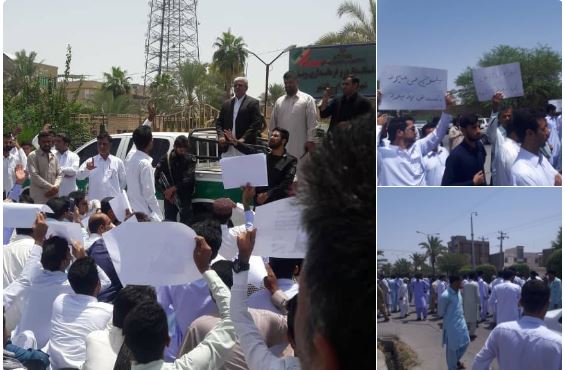 A number of protesters were arrested during the recent Iranshahr protest. The protest was held in support of 41 girls from Iranshahr who were abducted and were rapped. The Balooch Activists Campaign’s website wrote that Habib Zayn Al-Dini Lashari, is one of the detainees from the protest.

Earlier, Habibullah Sarbazi in a conversation with the Campaign said that his brother, Abdullah Bozorghzadeh was arrested as well. There are also reports of arresting several others but their identities were not available.

It has been reported that, these arrests were carried out by the Police Intelligence Agency, and then the detainees were handed to Revolutionary Guards Intelligence Agency. Iranshahr Citizens held protest rallies in front of the governor office on Sunday June 17th, 2018, and in front of the Nour Mosque on Tuesday June 19th, 2018. The rallies took place following the announcement of the 41 girls’ abduction and rape during Friday’s prayer by Mohamad Tabib Molazehi, the Imam of Sunnis. He noted that the number is the latest figure that Iranshahr Police Security Office has given based on the confession of an arrested person.

Hojjatoleslam Ebrahim Hamidi, the head of the Sistan and Baluchestan provenance Justice Department has denied the number 41, and said that the court has received only 3 complaints. The news brought massive reactions in the media and social network users and after that the Iranian security and judicial authorities announced further details of the incident.

Since Friday, following the public announcement of the event by Iranshahr Imam, the telegraph channels and other social medias associated with this city have been inflamed by the news. On Sunday morning, June 17th, 2018, a rally was held in front of the governor office and protesters demanded the arrest and punishment of the perpetrators of the incident. The BBC reported that the rapists wore Law enforcement uniforms.

According to this information, a number of these women and girls were abducted by people who were dressed in law enforcement or military uniforms and used guns to force them.

One of the doctors in the city, referring to the city as a strong traditional city in the area, said: “Most women who are being harassed do not come forward due to the the family and the community restriction and shame. The victims may even be at risk from their families. “

The city of Iranshahr is in southeastern Iran and in the province of Sistan and Baluchestan. The city has about 150,000 inhabitants and about 90% are Sunni Iranians.