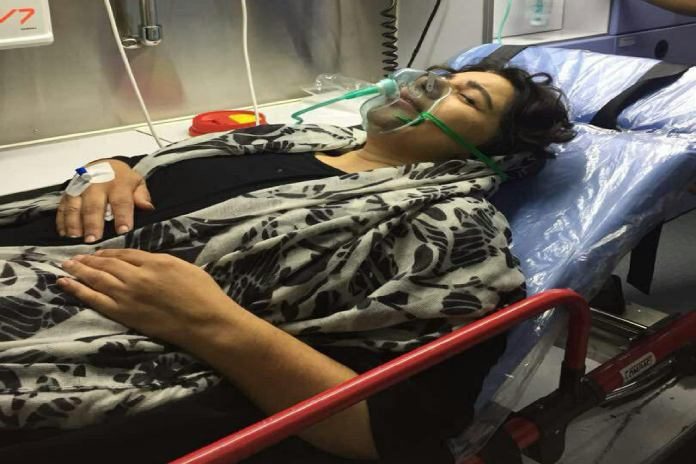 Arash Keykhosrowi, family lawyer for Kavous Saeidemami, an environmental activist who was suspiciously murdered in prison, described the details of the onslaught by security agents on Monday, Jun 25th, 2018 on Maryam Mambini’s house.

Arash Keykhosrowi, who along with the Payam Darafshan are Kavous Saeidemami family lawyers, in a conversation with Emtedad, said, “on Monday, June 24th, 2018, at 5:00PM, the agents entered Maryam Mambini’s house (late Saeidemami’s wife) and started filming. I got there around 7:15 PM and heard Maryam Mambini cry and it seemed she was not feeling well “

He added: “I introduced myself and said as Mrs. Mambini’s lawyer and I asked to see her. The officers who were there did not allow me to enter the house. Then one of their officers came out and I told him that, in accordance with the rules of criminal procedure, I should see my client, and he said that we are doing our own operations and you are not allowed to see her. “

Keykhosrowi emphasized that, “I asked them for their documents, and when I read the documents, I saw the document was signed by Jafari without his last name “Dolatabadi”, giving permission to enter the house to film for a documentary named Fall (the name was longer, but I just remember the first word) “

Keykhosrowi in response to the question of whether the officers took something from the house said, “I’m not aware, but I saw that with a pickup truck, they took several large boxes to the house. It was not clear what is inside the boxes. They did not tell us where the boxes came from and put them in the parking lot. “

He continued, “Ms. Mambini got sick after this incident and was taken to the hospital with an ambulance and currently is in the hospital and under care. Ms. Mambini, late Saeidemami’s wife is still banned from leaving country. I and the other family lawyer, Payam Darafshan are summarizing the subject for appropriate responses. “

Earlier, Maryam Mambini, was called by a security agency to answer some questions.

Ramin Saeidemami, a singer known as Kingram among Iranians, wrote on Monday, June 34th, 2018, confirming this on Twitter: “Yesterday (on a Sunday), my mother Maryam Mambini was summoned to answer a series of questions about my father, Kavos Saeidemami. “

Ramin Saeidemami, son of Kavous Saeidemami, an environmentally conscious activist who was murdered suspiciously in prison, wrote about the summons on this summoner. On Sunday, July 3, 1397, Maryam Mambini, the deceased Kavous Saeidemami’s wife, received a phone call and was invited, to answer some questions about the case of her late husband and his expulsion, go to a place in Tehran. Maryam Mambini went to that place without the presence of her lawyers.

Ramin Saeidemami described the details of his mother’s summons by a security agency in his telegram channel:  the invitee has stated that he is calling from the office of the judiciary, and to continue the case proceedings, Ms. Mambini should go to the stated address.

The place did not have official sign. It was written only “Supervisory and Monitoring Office”

She went to a room shortly after 3 PM in which the interview lasted until 6.30 PM.

One of the people was a young person who interrogated her at the Criminal Prosecutor office on February 9th, 2018, before the announcement of her husband’s death in prison.

During yesterday’s interrogation, the questions were presented in several ways: identification of individuals in the private photos of the Saeidemami family members taken at various occasions, the late Saeidemami trips to different parts of the country and abroad, but most of all the deceased’s relationship with foreigners in Tehran, either based on their photos or their names.

After asking questions, the interrogators asked Maryam Mambini to write the answers which became twenty-page document.

They explained the reason for the questions is to have a conclusion for the late S Saeidemami Spying case and other environmental activists, saying that the case is at the last state, and soon the evidence of the conviction of the defendants would be presented to the court.

For the case of Mambini’s band of leaving country, the interrogators admitted that Mambini was not charged because they were fully aware of their innocence.

In the end, they told Maryam Mambini that another interview would be scheduled for her by telephone.

Kavos Saeidemami, a sociology professor, and Imam Sadegh University faculty member, and the director of the Persian Heritage Wildlife Institute, was detained by the Revolutionary Guard’s agents on January 24th, 2018, and on February 8th, 2018, his family was informed of his death as “suicide”.

Ramin Saeidemami, Kavos Saeidemami ‘s son, a singer known as the Kingram among Iranians, was one of the first to call the reason given by the judiciary, suicide, as unbelievable. The singer wrote on Instagram and Twitter on February 10th, 2018: “The news of my father’s death, Kavous Sayed Emami, is unbelievable to me. Kavos was arrested on January 24th, 2018, and suddenly on February 8th, 2018, my mother, Maryam Mambini, was summoned by the court, , to give her the news of her husband’s death. They say it was suicide … I do not believe it. We will not. “