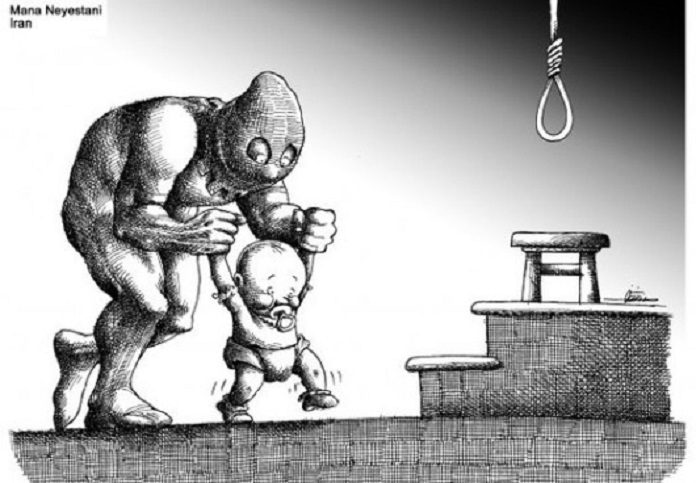 This morning, June 27th, 2018, “Abolfazl Chazani Sharahi”, a prisoner sentenced to death for a murder at the age of 15, was executed at the Qom Central Prison (Langroud).

Raha Bahraini, a researcher at Amnesty International, announced on her Facebook page that ” Abolfazl Chazani Sharahi ” was executed in Qom Central Prison on the morning of June 26th. This is the fourth child who has been executed in Iran over the past six months while the international community has repeatedly criticized Iran’s regime for juvenile executions.

Amnesty International’s Ambassador to the Middle East Magdelna Maghrebi, in earlier statement said: “Iranian authorities are well aware that the use of the death penalty for children under age of 18 is a gross violation of Iran’s obligations under international human rights law, including the Convention on the Rights of the Child. “

“Instead of showing such ruthless disregard for children’s rights, Iranian authorities should immediately stop the execution of Abolfazl Chazani and change his sentence to imprisonment.” Abolfazl Chazani Sharahi, was about to be executed six months ago, but his execution was stopped at the last minute at that time.

Mahmoud Amiri Moghadam, spokesman for the human rights organization, said: “our minimum and basic expectation from friendship between Iran and the European countries is to improve the human rights situation in Iran, and the abolition of the death penalty for children should be at least a condition for the continuation of these relations.”

Iran is one of the few countries in the world that continues to use capital punishment for crimes committed during childhood. Meanwhile, Article 91 of the new Islamic Penal Code, which has been ratified since 2013, gives authority to judges to refuse retaliation for children who do not know and understand the nature of the crime or its disrespect.

On July 20th, 2014, at the request of assigned lawyer, forensic medicine examined him and said: “The 15.5-year-old accused of committing murder in the past year has perfect rational and has the ability to understand the nature of the his act (murder).”

According to Human Rights Watch estimates, currently, more than 100 children in Iran’s prisons are facing death sentences. Recently, Human Rights Watch of Iran has reported on the death penalty of several of these child victims, including Mehdi Khazanian, Pouria Tabani, Mohammadreza Haddadi and Mohammad Kalhor.

It should be recalled that the Child Rights Convention, which Iran is also a signatory, explicitly states that the death penalty and long-term convictions should not be charged for children.