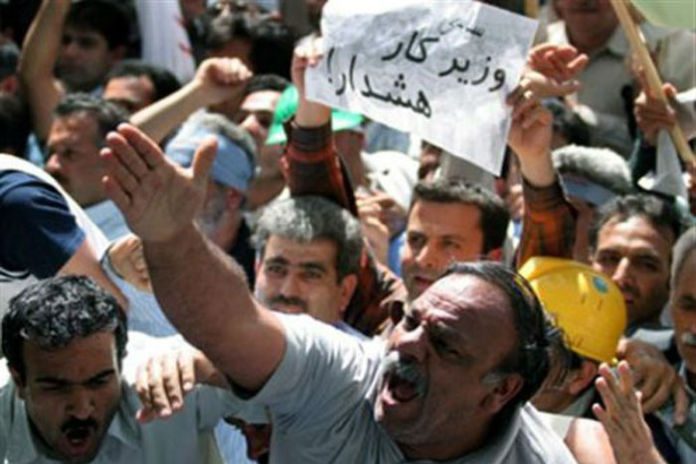 On Monday July 16th, 2018, during the gathering of workers’ representatives across Iran in Tehran, tens of Chadormulo Mining contractors and the Zagros Railways Engineering and Engineering Company of the Zagros District protested.

According to the Campaign for the Defense of Political and Civil Prisoners, yesterday, July 16th, 2018, a group of Tabas Chadormulo miners and the Zagros Railways Railway Engineering and Engineering Company they organized a protest rally against bad economic conditions and lack of jobs with the closure of their work.

“An agreement was signed at the Office of Labor with the presence of the Office of Labor officials, according to which, by June 21st, 2018, the employer was to pay wage claims; unfortunately, the agreement was not implemented and the employer did not comply with his obligations.” said Hussein Rajayan, chairman of the Hatami Contractors Workers Association, who is responsible for supplying power to the Chadermullu mine, in an interview with Iran’s Labor News Agency.

He said: “Hatami’s workers since 2014, have unpaid wage claims, including the pay for their children and pay for the age.”

On the other hand, a group of workers from the Zagros Railroad Engineering and Engineering Services Company, which is under the responsibility of the Traversal contracting company, had a protest rally in their area of ​​work.

According to these workers, wage and salary claims were delayed several months and another of their trade concerns was the lack of job security due to short-term contracts that have become worrying for more workers.

Meanwhile, on the same day, a group of workers’ representatives from all over Iran coincided with the Social Security Day in protest of the misuse the resources of the Social Security Organization in front of the building of the Ministry of Health in Tehran.