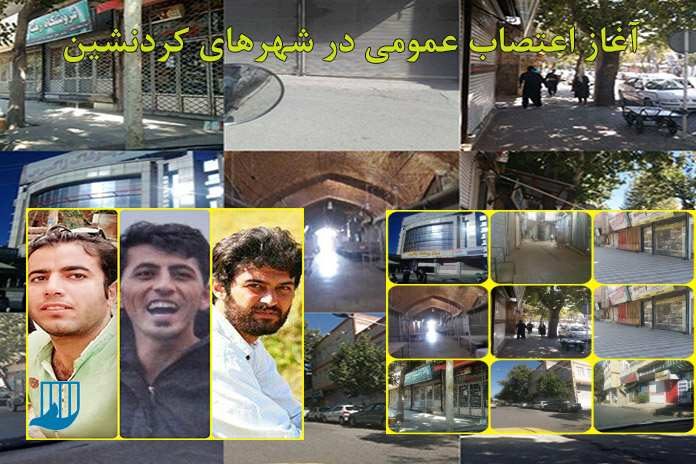 Today, following a general strike in the Kurdish cities, a number of Marivan’s residents were arrested and transferred to an unknown location.

According to the Campaign for the Defense of Political and Civil Prisoners, on Wednesday, September 12th, 2018, following a general strike in some Kurdish cities in Iran, in protest to execution of 3 political prisoners which include: Zanyar Moradi, Loghman Moradi and Ramin Hosseinpanahi and the Revolutionary Guards missile attack on Kurdish parties. Many Marivan’s residents, including Souran Daneshvar, Muslim Bahrami, Aram Fathi, Mohammad Azcat, Dilir Roshan, Ahmad Tabirie and Neishravn Rezaie, were arrested and transferred to an undisclosed location.

Although the campaign had previously reported the arrest of Marivan’s residents, but according to local sources, the number of detainees is increasing.

It should be noted that today at noon, September 12th, 2018, Khaled Hosseini, Mozaffar Salehnia and Mokhtar Zaraei, who were arrested by security agencies, were charged with promoting a general strike in the city of Sanandaj by Sanandaj Prosecution office, and after the bail amount was set, they were transferred to Sanandaj Central Prison.

This morning, on Wednesday, September 12th, 2018, according to reports submitted to the campaign, and based on the photographs and videos published on social networks, a general strike was started in some Kurdistan cities of Iran in protest to execution of three political prisoners, Zanyar Moradi, Loghman Moradi and Ramin Hosseinpanahi, and the Revolutionary Guards missile attack on Kurdish parties.

Some human rights web sites have reported on civil activists’ arrest in other Kurdistan cities.

Some eyewitnesses have reported the rapid decline of the Internet speed and the presence of a large number of security forces in some Kurdish cities, saying to the Campaign Reporter: “The speed of the Internet has slowed down dramatically after the strikes and public protests against the government, and the cities have been completely militarized. “

On Saturday morning, September 8th, 2018, Zanyar Moradi, Loghman Moradi and Ramin Hosseinpanahi were executed in one of the Revolutionary Guards bases in Tehran. On the same day, the Revolutionary Guard attached the headquarters of the Democratic Party of Kurdistan and the Iran Democratic Party of Kurdistan with missile in which at least 16 people were killed and many more were injured.