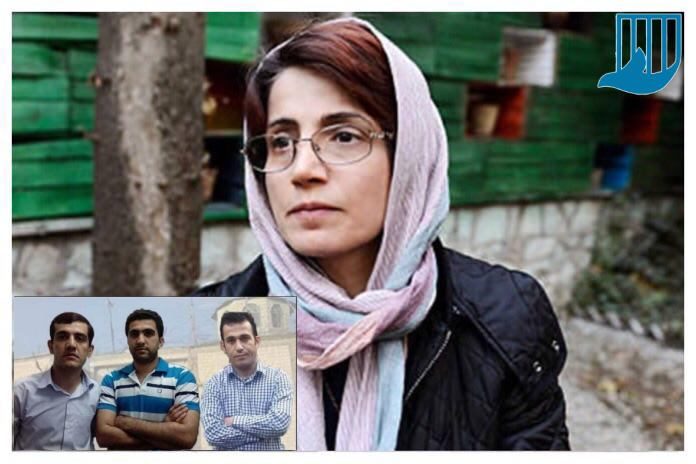 According to the Campaign for the Defense of Political and Civil Prisoners, Nasrin Sotoudeh, a lawyer and a human rights activist detained in Evin Prison since June 13th, 2018, issued a statement on execution of Ramin Hosseinpanahi, Zanyar and Loghman Moradi, three political prisoners from Kurdistan.

“Zanyar, Loghman Moradi and Ramin Hosseinpanahi were on hunger strike when they were executed by hanging, and this is another evidence of the substantive violence of Iranian Judiciary system, which should avoid any form of violence.” the statement said.

Read the text of the statement by Nasrin Sotoudeh:

Again, on the anniversary of the 1988 political prisoners massacre, the Iranian judicial system executed three Kurdish compatriots, fellow citizens who have been subjected to numerous oppressions over many decades.

Their verdict, which was issued in a clearly unlawful manner by the Revolutionary Court, was unfair and contrary to human rights and the law of the Islamic Republic of Iran.

This is at a time that at least one of the cases was undergoing a reinstatement of his case and possibly leading to his acquittal.

Zanyar, Loghman Moradi and Ramin Hosseinpanahi were on hunger strikes and had bared many days of hunger, when they were executed by hanging, and this is another evidence of the substantive violence of Iranian Judiciary system, which should avoid any form of violence

While, I extend my condolences to my dear Kurd compatriots, who have always played an important role in promoting Iranian culture, I also extend my condolences to all my compatriots, especially the families of Moradi and Hosseinpanahi, and I hope with enough attention to the various aspects of judicial violence that appears in different types of violence, provide the necessary bases to avoid any form of violence.

Reza Khandan, Nasrin Sotoudeh’s husband, who is currently in custody, on Wednesday, June 13th, 2018, reported that Nasrin Sotoudeh was arrested on charges of collusion and using propaganda against the regime.

On Wednesday, June 23th, 2018, Amnesty International warned against the arrest of the lawyer, announcing that “The arrest of Nasrin Sotoudeh, a prominent human rights lawyer, was a brutal attack on the brave and capable human rights defenders.”