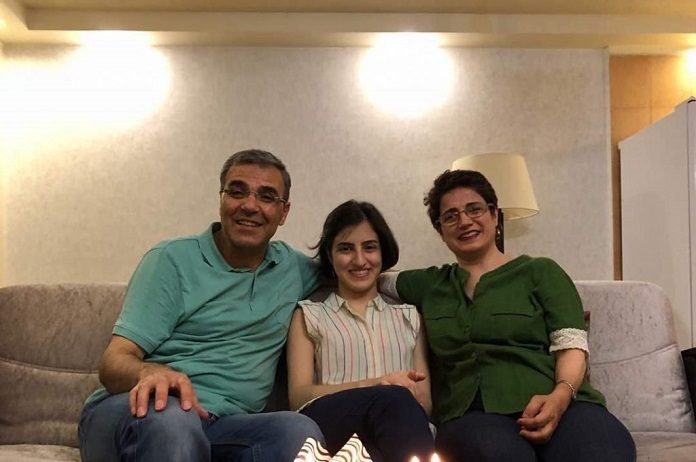 Mehraveh Khandan, daughter of Nasrin Sotoudeh and Reza Khandan, both detained in Evin Prison, announced that Nasrin was not present at the prison visiting stall in protest to the pressure on her to sign a compliance to keep her Hijab.

Mehraveh Khandan told Campaign: “Nasrin Sotoudeh, in protest to the persecution for not having a hijab at the time of the stall meeting and the pressure to” sign a pledge to keep the veil in full “, refused to be present for her weekly meeting on Sunday September 16th, 2018. She in protest to the “harassments”, she announced that she will not go to the prison visiting hall.  Also in protest of the pressure and harassment of her family and friends by the Ministry of Intelligence, she has been on hunger strike since August 25th, 2018.”

“The director of the Evin Prison visiting room, before the meeting of September 26th, told her ” The prosecutor’s office sent a letter to her and Ms. Sotoudeh regarding their Hijab and if they do not keep the hijab on, they will not be allowed to visit. “

According to Mehraveh Khandan, she was threatened while she was “covered as always and she had no problems.” Mehraveh and Nima Khandan could not visit their mother in Evin Prison this week.

She continued: “When we arrived in the hall, after waiting for half an hour, my mother’s jail mates told that, they asked their mother to sign a letter of commitment to comply with full hijab rules, which mother resisted. After that, the mother announced that she would refuse to meet and call in protest. “