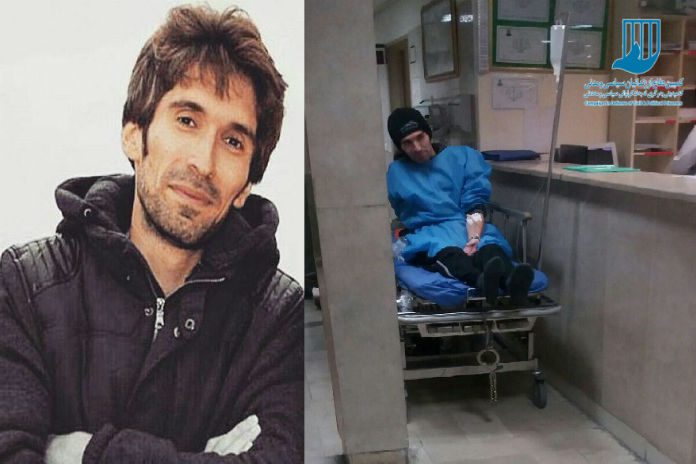 In the case of delaying treatment for Arash Sadeghi, a human rights activist detained in Rajai Shahr prison, his illness will be intensified.

According to the Campaign for the Defense of Political and Civil Prisoners, Arash Sadeghi, a human rights activist and political prisoner in Rajai Shahr prison, whose “Chondrosarcoma” cancer had been confirmed in the past by doctors, if the treatment gets delayed, the cancer will be spread to the wrist bone and other organs. “

In addition, it was reported that he was beaten by security guards at Imam Khomeini Hospital in Tehran, on Saturday, October 13th, 2018.

An informed source told the campaign: “Last Saturday, Arash was transferred to Khomeini’s hospital for a doctor visit. At the hospital’s Cancer department, some people that knew him greeted him. The security guard told him that “[he] had coordinated”. Arash did not respond to the accusation, causing the security guard to strike Arash with his palm and throw him to the ground. At the same time, a second security guard joined and start kicking Arash while he was handcuffed.”

‘The people who were around separated them, and Arash decided not to attend his doctor’s appointment, but the doctor and the hospital’s agents persuaded him to be examined,’.

Prior to this, authorities in the Rajai Shahr Prison, have repeatedly prevented sending Arash Sadeghi to a hospital, and the Campaign had published a report on it.

According to the latest reports, his condition is severe and his hand is heavily infected, and if he is not sent to health centers, his health will severely deteriorate.

It should be noted that Arash Sadeghi was abandoned in solitary confinement with the injuries during the interrogation period that led to a broken arm and leg. It seems due to the excessive and abnormal cell proliferation in the fracture area for the past one and half year, severe pain was caused, and he does not have any food intake due to long-term hunger strikes and his current weight is about 43 kilos.

Arash Sadeghi, who is infected with acute ulcerative colitis and is likely to develop colon cancer due to lack of medical attention, is now at risk of developing another cancer.

He has suffered from various illnesses because of a long and continuous hunger strikes. He is suffering from respiratory discomfort and digestive, stomach and intestines diseases. His kidney has been said to have been seriously damaged by constant hunger strike and lack of medical attention.

He was arrested by the Revolutionary Guard in April 2014 and was released after 6 months imprisonment on 600 million Tomans bail. During his temporarily released from prison, the agents raided his home to arrest him which caused his mom a stroke and eventually she died.

Arash Sadeghi was arrested in May 2016, for last time.  In October 2017, he started his hunger strike for 70 days, and on September 2017, he was transferred to Rajai Shahr prison in Karaj from Evin Prison. This political prisoner recently launched a new hunger strike on Friday, February 25th, 2018, in protest to his wife, Golrokh Iraee, and Atena Daemi transfer from Evin Prison to Gharchak Prison (Shahr-e- re) with beating and insults. He ended his hunger strike due to severe physical weakness and respect for his inmate friends’ request.