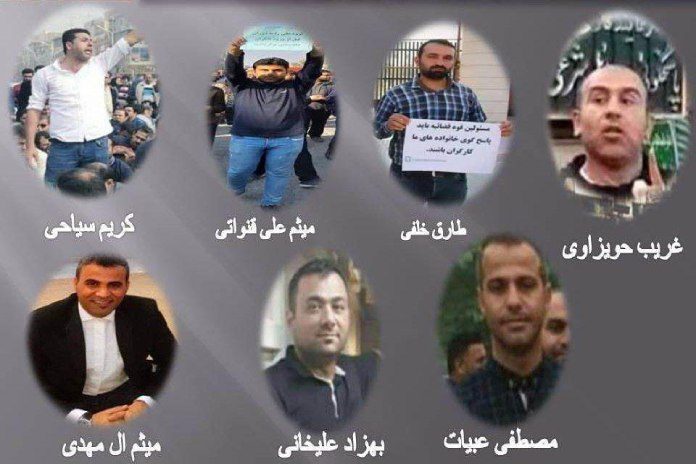 Despite the Ahvaz judicial authorities promising that they would order the release of all detained Ahvaz Steel workers, at least 7 of them are these workers are in detention.

According to the Campaign for the Defense of Political and Civil Prisoners, despite the Ahvaz judicial authorities promise to the families of Ahvaz Steel detainees yesterday that all detainees from Ahvaz Steel would be released by the end of the administrative hours, “at least 7 of them have not yet been released. The families are concerned with the situation of their family members in detention.”

According to local sources, Karim Sayyahi, Maysam Al Mahdi, Mostafa Abyat, Tariq Khalafi and Behzad Alikhani are currently in the detention center of the Ahvaz Islamic Revolutionary Guard Corps under “extreme pressure and torture for confessions”. Gharib Hvizawi and Maysam Ali Ghanavi are also detained in the quarantine section of Shiban Prison (Central prison of Ahvaz).

A source close to one of the detainees told the campaign, “families have been told that, until Saturday, there has been no news of the release of detained workers.”

On the other hand, the families of the detainees have been calling for the release of their children and relatives by holding gatherings on consecutive days against the governorate of Khuzestan.

Mohammad Ali Jadri, a lawyer for some the arrested workers from the Ahvaz Steel National Group, told the Iranian Labor News Agency on Wednesday, December 26th, 2018 that a number of detained workers have not yet been released.” Just one worker was released on bail yesterday, even though the letter of the release of eight workers was signed yesterday.”

These arrests intensified after the increase in the scope of Steel Workers’ protests in Ahvaz. On the evening of Sunday, December 16th, 2018, a large number of workers from the Ahvaz Steel National Industrial Group, were detained by security forces in their own homes and transferred to unknown locations. It is said that these arrests took place without a judicial order.

These mass arrests were carried out at the time with an order from the Ahvaz Prosecutor’s Office. In addition to more than 10 arrests, Ahvaz police forces contacted many of the workers and requested their home addresses.

Demands of the workers of the Ahvaz Steel National Group include: the return of the company to the government, the continuous flow of bullion and raw materials, the launch of all production lines, the supply of equipment and components, the continuous sale of products, and a timely and continuous payment of workers’ wages.”