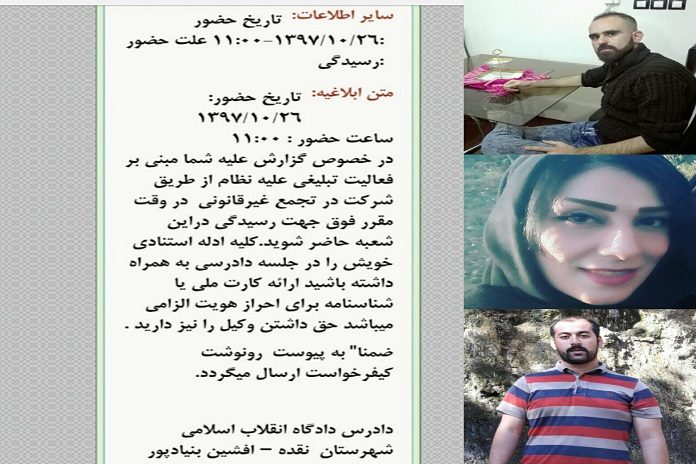 According to the Campaign for the Defense of Political and Civil Prisoners, yesterday, December 27th, 2018, Oulduz Qasemi, Javad Ahmadi Yekanally, and Amir Sattari were summoned to the Revolutionary Court of Naghdeh City by email.

According to this summoning, these individuals must attend the Revolutionary Court on January 16th, 2019.

They are charged with “propaganda activity against the state through participation in an illegal gathering.”

Oulduz Qasemi, Javad Ahmadi Yekanally, and Amir Sattari were released on bail after a few days from the Intelligence Agency Detention Center.

It is worth mentioning that Oulduz Qasemi, who has repeatedly been summoned and arrested, was sentenced to one year imprisonment by the Branch 1 of the Revolutionary Court of the city on November 10th, 2018.

Between 16% and 25% of the population of Iran are Turkish Speaking citizens and most of them live in the provinces of East and West Azarbaijan, Ardebil and Zanjan. Some of these citizens regard the rule of law as discrimination, and the prohibition of teaching non-Persian languages in schools is one of the most prominent cases of discrimination, which has always been the subject of protest by some of the civil activists in these areas.