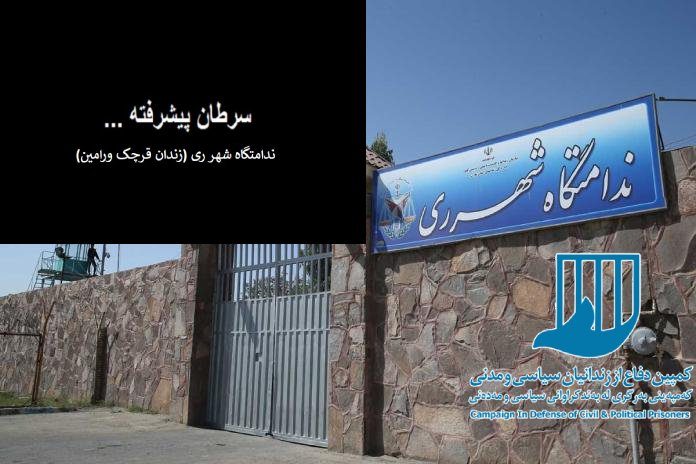 “A documentary on the status of women in the Rey prison, also known as the Gharchak prison in Varamin.”

Mohammad Moghimi, Attorney at Law and Master of Human Rights;

Athena Farhghodani, an artist and cartoonist;

Ms. Shafiye says: “The purpose of this documentary is to publish the status of prisoners and prisons. The name, “Advanced Cancer”, was chosen because the growing population of female prisoners and increasing injustice against them is like cancer and, of course, no solution has yet been prescribed for treatment. There are wounds that are covered and no one has the permission to know about it them, but how can a woman, who can be the source of a generation’s education, pay attention to this responsibility with the wound that has been inflicted on her soul? When a mother can be full of hatred for reasons that the film explains, how can we expect the next generation to taste the righteousness or freedom?”

Zahra Shafiye added: “Another point is that, regardless of feminine gender and feminine feelings, only women have been told that it is their duty to give birth. In this video, each of the participants will pay attention to some of these things, and with watching and listening to the video, you will understand more.”

Among these prisoners are women who are pregnant or spending their sentence with their children.

Penitentiary in Rey (Gharchak Prison) is one of the worst prisons in Tehran province in terms of amenities, health issues, prisoners’ access to appropriate treatment, and even drinking water.

The women prisoners in Gharchak prison in Varamin are in such poor condition because of numerous problems, including inaccessibility to hot water, excessive congestion of women imprisoned in prisons, inappropriate rationing, and excessive goods at the prison’s store.

The Rey Prison (also known as Gharchak Prison) was once a poultry farm, and now hundreds of women who have been sentenced to prison for harsh crimes are living there in dense and unsanitary conditions without access to safe drinking water, good food, medicine, or fresh air. Reports from the prison indicate a widespread outbreak of infectious diseases, drug usage, and high levels of violence among prisoners as well as by agents against prisoners.

The prison is in a desert near the east of Tehran, where the geographical location of the prison makes it difficult for the families of the prisoners visit.