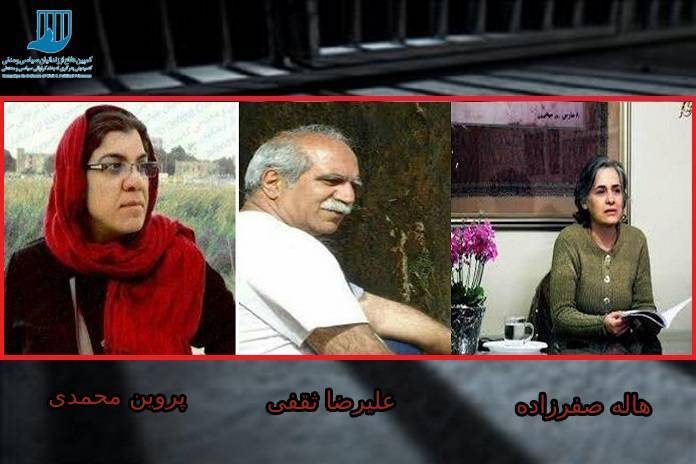 Branch 6 of the Alborz Province Court of Appeals upheld the one-year prison sentence for labor activists Parvin Mohammadi, deputy chairman of the Free Trade Union Board of Iran, Alireza Saghafi and his wife, Haleh Safarzadeh, both members of the Workers’ Rights Defender’s Association. Branch 1 of the Karaj Revolutionary Court sentenced these three labor activists to prison on charges of “propaganda against the system“.

According to a report released by the Free Trade Union of Iran and a court ruling issued on October 1st, 2019, confirmed by two court clerks Rasoul Karampour and Rahman Shaabani, “The Court of Appeals has examined the case and all documents. The court ruling is consistent with the usual investigations and substantiated arguments in the case, and does not see the basis of implication and conformity with the appeals and justified reasons for the violation. The appeal court did not require that the appeal be filed, so it relies on Article 455 of the Criminal Procedure Code, rejecting and challenging the appeal. The ruling is final.”

The trial of the three labor activists was held separately at the First Branch of the Karaj Revolutionary Court on Saturday, August 24th, 2019, chaired by Judge Asif Hosseini, on charges of “propaganda against the system”.

The Campaign published a report earlier on the trial of labor activist Parvin Mohammadi.

An informed source on the trial of Ms. Mohammadi told the Campaign, “On Saturday morning at 9 AM, the hearing of Ms. Mohammadi’s case was held at the first branch of the Revolutionary Court, chaired by Judge Asif Hosseini, and in the presence of the case lawyer Mr. Jadari Foroughi”.

At the hearing, the indictment was initially heard, and Asif Hosseini, the judge in the case, accused Ms. Mohammadi of “propaganda against the system” through the distribution of communist ideas, activities, articles, and speeches. Ms. Mohammadi denied the allegations and mentioned that the publications are in line with the demands of her rights and those of her fellow workers and associates.

The campaign reported earlier that during the interrogation session, Parvin Mohammadi  pleaded not guilty and stated that she had been charged with the same allegations during her previous detention, during which Fardi’s Prosecutor’s Office had interrogated her according to the documents and defense of the case. The charge was acquitted, a prosecution warrant was removed, and charges were dismissing. She asked the interrogator, “What is happening now that within a month, they are going to give her the same charge in a new case?”

At 8:30 PM that night, eight of the detainees were released, but the release of the rest was postponed until later.

Parvin Mohammadi, deputy chairman of the Free Trade Union Board of Iran and labor activists, as well as Haleh Safarzadeh and his wife, Ali Reza Saghafi, were released on bail on May 11th, 2019.

Every year, on the eve of International Labor Day, intelligence agencies are increasing pressure on labor activists, and security forces are trying to prevent marches or possible protests by summoning or detaining some of these labor activists.