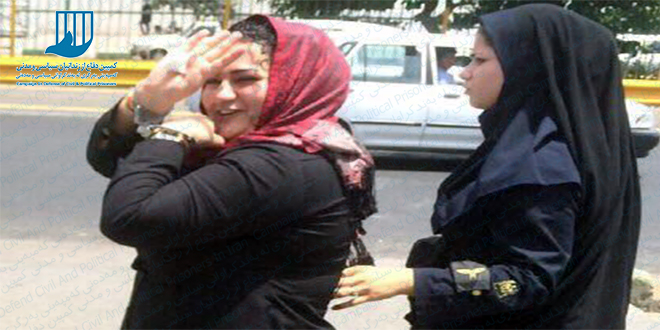 Atena Daemi, a civil rights and children labor activist, was taken to Sadeghiyeh clinic in Tehran because of her hormonal disorders on Saturday 4 July 2015.

The civil rights activist who is kept in public ward of women  known “Neswan” according to the news received by the Campaign Defend to Civil and Political Prisoners in Iran. She directly transferred to the clinic due to hormone imbalances and shortage of medical equipment in the prison while was frequently visited in the prison clinic.

Her relatives had apparently borne its own costs and expenses of the medical treatment according to the news.

Atena had previously got stomach bleeding and transferred to the prison clinic as a result of her health deterioration. She allegedly suffered from nose bleeding when she was returned back to Ward Neswan.

She has forcibly used sedation medicines and prison clinic refused her demand to access the medicines. Atena’s family had coercively borne its own costs purchasing the medicines.

Atena, 27, suffers from skin diseases and poor eyesight because of long-term imprisonment in the solitary confinements and critical conditions due to the shortage of accessing air freshening systems and sunlight as the campaign was informed.

Atena has been detained in Oct 2014 on the charges derived from the criticism on her Facebook and Twitter against executions and human rights violations in Iran, as well as her participation in gatherings outside prison in solidarity with families of death row prisoners, distribution of anti-death penalty pamphlets and her association with Human Rights defenders and the families of those killed during the crackdown that followed the 2009 election. She was also accused of supporting Kobani through attending the demonstration that gathered in front of UN office in capital of Iran, Tehran.

Recently, Amnesty International has postured an action to support the civil rights activist Atena Daemi acting and sending a message in its website as well.

Amnesty International has made a stand and expressed concern over her critical situation and wrote in its official website;

Ensure that Atena Daemi receives any medical attention she may require;

Respect Articles 19, 21 and 22 of the International Covenant on Civil and Political Rights — to which Iran is a state party — which protect the right to freedom of expression, association, and assembly.