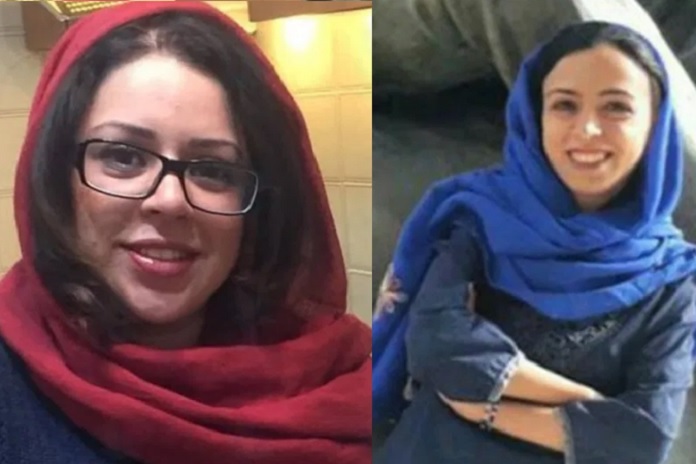 Hoda Amid and Najmeh Vahedi, two women’s rights activists, were sentenced by Branch 1 of the Revolutionary Court of Tehran to a total of 15 years in prison and additional punishment.

Branch 15 of the Revolutionary Court of Tehran, headed by Abolghasem Salavati, issued an indictment for Najmeh Vahedi, a sociologist, and Hoda Amid, a lawyer today, December 12th, 2020. They were sentenced to a total of 15 years in prison on charges of “collaborating with a hostile US government”. In addition, Hoda Amid was sentenced to 2 years deprivation of social rights and 2 years deprivation of practicing law.

According to the lawsuit, Najmeh Vahedi, a graduate student in women studies at Allameh Tabatabai University and a women’s rights activist, was sentenced to seven years in prison and 2 years deprivation of some social rights on the charges of “collaborating with the hostile United States government”.

Hoda Amid, a lawyer and women’s rights activist, was arrested by security forces at her private home on September 1st, 2018.

This women’s rights lawyer was temporarily released from Evin Prison on bail on Sunday, November 4th, 2018.

She was temporarily released from Evin Prison after 67 days of temporary detention on 300 million Tomans bail pending trial on Tuesday, November 6th, 2018.

Hoda Amid and Najmeh Vahedi have also been active in empowering women and girls, including holding workshops on women’s rights in the field of marriage and divorce.