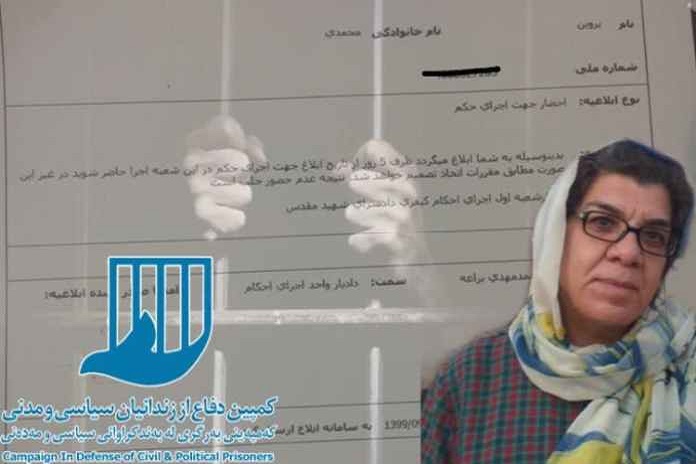 Labor activist Parvin Mohammadi was sentenced in absentia to prison terms. This sentence was issued in her absence.

According to the Campaign for the Defense of Political and Civil Prisoners, labor activist Parvin Mohammadi, who was released a few months ago after being sent on medical leave, was sentenced to prison terms in a new case.

Ms. Mohammadi says it is not clear what the charges against her are and she does not know the extent of her conviction.

According to the notification received by Ms. Mohammadi, she must appear before the Verdict Execution office of the First Branch of the Evin Shadid Moghadas Court within 5 days.

Parvin Mohammadi, while protesting against her sentencing in her absence says, while this new sentence has been issued for her, she has been available to the Iranian judiciary throughout her detention in Evin and Kachuei prisons and security detention centers.

Ms. Mohammadi was on leave, following the outbreak of the Corona virus on Wednesday, February 26th, 2020. On Saturday, May 2nd, 2020, she went to the Karaj Sentences Execution office to follow up on how to extend her leave, and was informed of her early release.

“Parvin Mohammadi” was previously summoned to the Penal Enforcement Branch of the Karaj Public and Revolutionary Prosecutor’s Office for serving one-year prison sentence on the basis of an electronic notification that she had received. On Saturday, December 7th, 2019, after she appeared at the District 1 Court, branch 7 in Karaj, was arrested and transferred to Kachuei Prison.