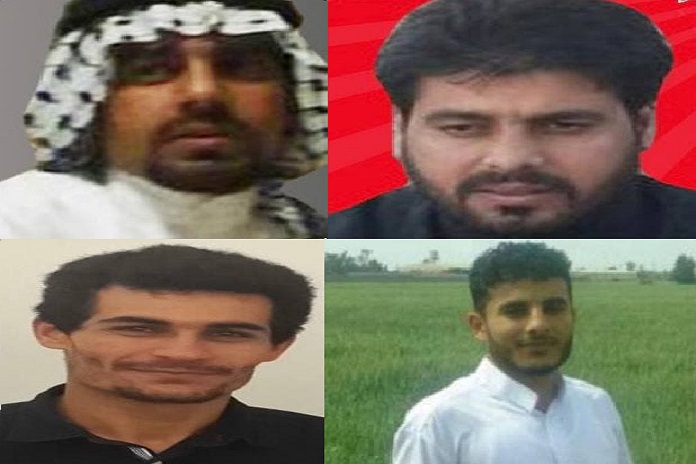 According to the Campaign for the Defense of Political and Civil Prisoners, four Iranian Arab political prisoners, Jassem Heydari, Ali Khosraji, Hossein Silavi, and Nasser Khafajian, minutes after their last visit with their families were executed without prior notice of imminent execution on the evening of Sunday, February 28th, 2021.

“The execution of these four Iranian Arab activists took place minutes after their last visit with their families,” said Karim Dahimi, a human rights defender.

Mr. Dahimi added, “This is despite the fact that prison officials did not inform the families of these political prisoners of their imminent execution”.

Ali Khosraji, 27, resident of Alavi street, Ahvaz; Hossein Silavi, 31, resident of Khabineh district of Ahvaz; and Nasser Khafaji (Mormazi), 34 (of NAJA officers) accused of collaborating and participating in the attack on Ahvaz’s police station on 23 Mojahedin street in 2017.

Their death sentence by the initial court was upheld by the Court of Appeals, and also was upheld at the Supreme Court as well.

Hossein Silavi, an Iranian Arab prisoner sentenced to death, was transferred to an unknown location along with his two co-defendants “Ali Khosraji” and “Nasser Khafajian” during the prisoners’ protests in Shiban Prison on Monday, March 31st, 2020. Later they were returned to the quarantine section of Shiban Prison in Ahvaz.

The death sentence for Jassem Heydari, a resident of Zafaranieh street in Ahwaz, was approved by the supreme court and communicated to this prisoner. He was arrested by the Intelligence Bureau of the city in December 2017 and tried in the Second Branch of the Ahwaz Revolutionary Court on charges of “Revolt”.

He was transferred to Sheiban Prison in Ahvaz after several months of intensive interrogation and physical and psychological torture.

Marzieh Heydari, the mother of this civil activist, was arrested on March 11th, 2018.  She was under a lot of pressure to obtain forced confessions against her son.

Marzieh Heydari was transferred to Sepidar Prison after being interrogated and informed of the charges, and was later released on bail.

Jassem Heydari was one of 30 detainees in Sheiban Prison in Ahvaz and was charged by Branch 101 of Criminal Court 2, headed by Mansour Motamedzadeh, in connection with the prisoners’ protests in April 2020.

While reports at the time indicated that at least three prisoners were suffering from coronavirus in Sheiban Prison, videos were released around Sheiban Prison in Ahvaz on Tuesday, March 31st, 2020, showing images of smoke over the prison grounds and the sound of gunfire was also heard in video.

Reports indicated that the families of the detainees had gathered in the Shushtar-Ahvaz road and had clashed with security forces. The police commander of Khuzestan province had announced that the prisoners’ riot had been contained and peace had returned to the prison.

Branch 101 of the second Bavi Criminal Court, after informing these protesting prisoners of the charges, stated that these charges could lead to the death sentences for some of these individuals.

Amnesty International said at the time: “Three Ahwazi Arab prisoners sentenced to death in Sheiban Prison in Ahvaz, Khuzestan Province – Ali Khosraji, Hossein Silavi and Jassem Heydari – in protest of prison conditions, constant threat of execution, and being barred from visiting their families have sewed their lips and gone on a hunger strike since January 23rd, 2021.”

According to the statement, Amnesty International expressed concern over the situation of Nasser Khafajian, adding: “This Iranian Arab has been in a state of enforced disappearance since April 2020, thus endangering torture and secret execution.”

UN resolutions to abolish the death penalty were first adopted by the UN General Assembly in 2007 and second in 2008 as the first step towards its complete abolition. In 2008 and 2010, the Secretary-General presented a report on the latest developments in the stop and abolition of executions in various countries to the General Assembly. In these resolutions, while emphasizing the termination of the death penalty, it is stated that the perpetrator, as a human being, has the right to life and many other rights, and the legislature and the legislative system do not deprive the individual of these rights simply because of being a criminal. The Second Protocol to the International Covenant on Social and Political Rights on the abolition of the death penalty was adopted by the General Assembly in 1989.

Iran is one of the first countries to sign the Universal Declaration of Human Rights, but the Islamic government does not respect its implementation in the country. However, nearly seventy years after this historic event, according to international human rights bodies, including the UN Commission on Human Rights, Human Rights Watch, Amnesty International, Reporters Without Borders, and the Society for the Defense of Human Rights in Iran, the Islamic regime has the worst and most criminal record of human rights and executions worldwide.

The Campaign for the Defense of Political and Civil Prisoners, in line with its mission, seeks to work with other human rights activists to fight against the issuing and implementing the death penalty, and calls on civil society activists and human rights defenders around the world to not stop working around the clock until the complete abolition of this inhuman punishment in Iran.