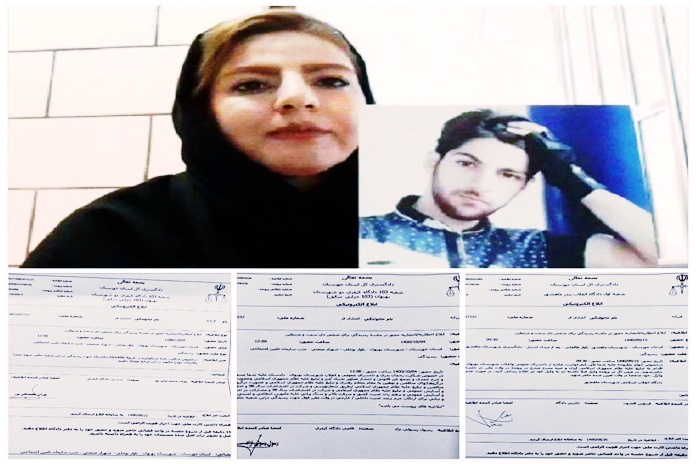 Farzaneh Ansarifar, one of the plaintiff sisters of the November 2019 uprising victims, has been summoned by the Khuzestan Justice Department after receiving three notifications in the last two weeks.

According to the Campaign for the Defense of Political and Civil Prisoners; Farzaneh Ansarifar, sister of Farzad Ansarifar, one of the victims of the Aban uprising, has published a note announcing that she has received three notifications in the last two weeks and been summoned to the First Branch of the Mahshahr Revolutionary Court and Branch 103 of the Behbahan Criminal Court.

According to the notifications received, she must appear at the branches in due time to present her final defense on the charges against her.

Following the pressure of the intelligence and security agencies on this plaintiff sister, the accusations against her listed as “illegal gathering”, “publishing provocative images and propaganda against the regime”, “insulting Ali Khamenei”, “propaganda against the regime through slogans and Participation in the protests of 2019”, “disturbing public order and disturbing the security of the country”, “gathering and colluding to commit a crime against the security of the country” and “throwing stones at law enforcement and security officers”.

One of the charges against Ms. Ansarifar is the assault on Rahman Badri, the former commander of the Behbahan Special Forces, and breaking his arm. She has also been charged with the bizarre charge of “stealing a lift.”

After participate in protest rallies in Behbahan and join the No to the Islamic Republic campaign, she was convicted on charges of “participation in disturbing public order”, “disrupting national security” and “conspiracy to commit a crime against internal and external security”.

Farzaneh Ansarifar is the sister of Farzad Ansarifar, who died at the age of 28 during a nationwide protest in the city of Behbahan on Saturday, November 16th, 2019.