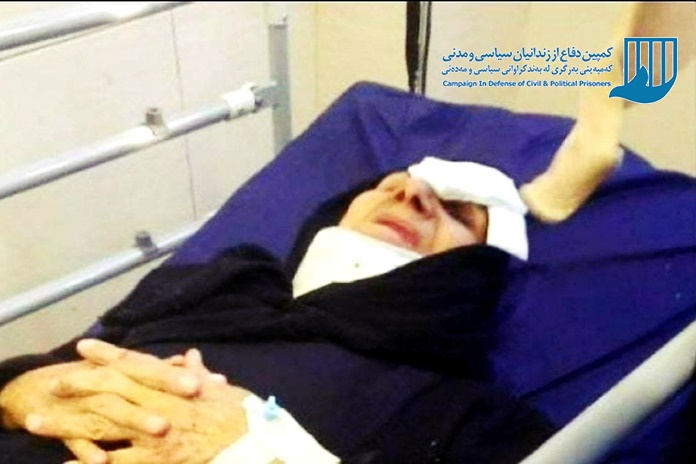 Gohar Eshghi, the mother of Sattar Beheshti, was subject of “assassination” attempted by unknown individuals, and she has been taken to the hospital by passing by people.

According to the Campaign for the Defense of Political and Civil Prisoners, Gohar Eshghi was attacked unidentified individuals on Thursday, December 9th, 2021, at 11:00 AM Tehran time.

According to this report, the incident took place at 11:00 AM Tehran time, after which Gohar Eshghi fell on the ground and was injured in the head and face, was taken to the hospital by passers-by.

One of the eyewitnesses told the Bonyad’s reporter: “Mother Gohar Eshghi is the bright star of Robat Karim and the majority of people know her, especially that she has been going to visit her son every day at this time every day for many years.”

The eyewitness said that I was inside the shop when people shouted and asked for help. When I approached the crowd, I saw the Satar’s mom is lying on the ground while bleeding.

The description of the incident is as follows: Gohar Eshghi was walking towards the Imamzadeh when a motorcyclist with two occupants came from behind and one of the riders dismounted the motorcycle and threw Gohar Eshghi.

After this attack, Gohar Eshghi fell on the sidewalk and after a while, she lost consciousness.

When the Gohar Eshghi gains consciousness, she realized that she was taken to hospital by some people. After a superficial and initial examination, she was released from the hospital.