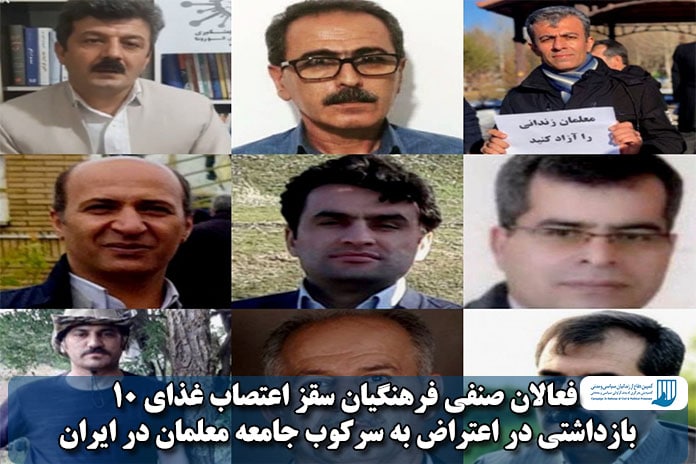 Ten of arrested educator cultural activists in Saqez city went on a hunger strike to protest the repression of the Iranian teachers’ community.

According to the Campaign for the Defense of Political and Civil Prisoners; According to the received reports, at noon on Sunday, June 19th, 2022, Khaled Abdullahi, Soleiman Abdi, Ahmad Ghaderi, Amanj Amini, Zahed Moradi, Ismail Reyhani, Hesam Khakpour, Taher Hamedi, Mohsen Shokouhi and Hassan Rahimian, ten educator cultural activists in Saqez city of Kurdistan province, that are in detention, announced their hunger strike.

According to this report, the reason for the hunger strike of these 10 unionized cultural activists imprisoned in the detention center of the Saqez Intelligence Office is to protest against the illegal detention process and failure to address the demands of the Iranian Cultural Society.

It should be noted that Khalid Abdullahi, Soleiman Abdi, Ahmad Ghaderi, Amanj Amini, Zahed Moradi, Ismail Reyhani, Taher Hamedi were arrested by security forces in the city of Saqez in the province of Kurdistan on June 15th, 2022.

Also, Hesam Khakpour and Hassan Rahimian were arrested at the same time as the nationwide protest rallies of Iranian cultural figures in the city of Saqez on June 16th, 2022.

On May 2nd, 2022, the case of Taher Hamedi, Amanj Amini, Ahmad Ghaderi, and Khaled Abdullahi, along with five other activists of the Saqez Cultural Association, regarding their peaceful trade union activities, were referred to the Investigation Branch and the Prosecutor’s Office of this city in another case after the end of the interrogations.