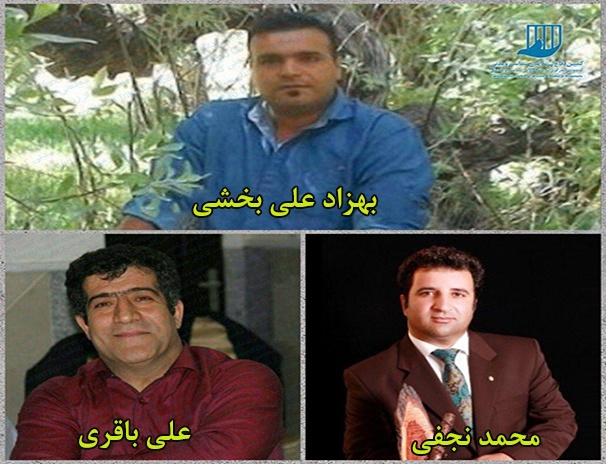 The latest developments in civil activists arrested in Shazand, Arak case, yesterday, Mohammad Najafi, a detainee’s lawyer that has been detained himself in Arak prison, was transferred to section 8 of prison. Ali Baghari also continued to be detained in investigation section and Behzad Ali’s warrantor has been changed to bound.

According to the Campaign for the Defense of Political and Civil Prisoners, on February 21, 2018, Ali Najafi, a detainee’s lawyer who is detained himself in central Arak prison, was transferred from Interrogation unit to section 8 of prison.

It has been reported that on February 18, 2018, the detention time for two Shazandian civil activists, Mohammad Najafi and Ali Bagheri, has been extended for another month by Shazand’s Prosecutor’s office

Need to mention that earlier, Ali Bagheri, and Mohammad Najafi, the two civil activists in Shazand who pursued the Vahid Heidari’s case, were arrested on January 25, 2018 afternoon by security guards and taken to Arak Prison.

Vahid Heidari is one of the prisoners that was killed in Arak’s 12th Militia Detention Center.

Also on January 20, 2018, Behzad Alibekhashi, another civil activist and a detainee himself associated with following-up on Vahid Heidari’s case, was arrested when he appeared in the court in response to summons from Shazand’s court and transferred to Arak’s prison.

Ali Bagheri, Mohammad Najafi, Kian Sadeghi and Behzad Alibekhashi from Shazand Arak and Abbas Safari from the city of Astaneh are case protesters that were arrested in January of this year.

Kian Sadeghi was accused of participating in protests and propaganda against the regime through filming and photographing at Najafi’s mother funeral.

The rest of the people have been accused of “participating in protests, disrupting public order, disturbing public opinion and publishing lies (in connection with the Vahid Heidari’s death”), and establishing membership in the dissatisfy group.

For Najafi and Bagheri, in addition to these allegations, the interviews with foreign media were also added to their case.

Currently, Abbas Safari and Kian Sadeghi have been temporarily released from detention.